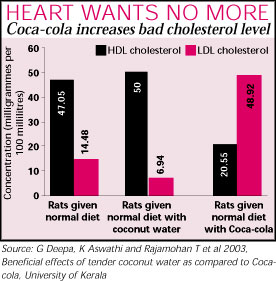 while a joint parliamentary committee probes into the details of alleged pesticide residues in aerated drinks, researchers have found that rats fed with Coca-cola developed ulcers and inflammation in their intestines, besides having damaged liver cells. The researchers, from the Thiruvananthapuram-based Kerala University, conducted numerous experiments to compare the beneficial effects of coconut water with Cola-cola. They presented their findings during a two-day national seminar on coconut and its products organised by the state-owned Coconut Development Board in Thiruvananthapuram on September 19-20, 2003.

During the experiments, equal volumes (four millilitres per 100 grammes of body weight) of Coca-cola and coconut water were given to two batches of rats -- one consuming a normal diet, the other eating foodstuff rich in cholesterol. Concentrations of cholesterol and triglycerides (lipids containing most body fat) in the serum, liver and aorta (the main artery) of the rats given Coca-cola were found to be higher than those fed coconut water.

Moreover, coconut water was even able to reduce the levels of ldl (low-density lipoprotein) -- the bad cholesterol -- and increase the concentration of hdl (high density lipoprotein) -- the good cholesterol. The effects of Coca-cola were exactly opposite. According to the researchers, their findings are an ample proof of the fact that coconut water reduces the risk of heart diseases, while Coca-cola makes one susceptible to them. The soft drink was also found to be highly acidic at a ph value of 2.7 and it contained additive caffeine, phosphoric acid, ethylene glycol and artificial sweeteners.

The researchers even observed that the intestinal villi (finger-like projections in the intestine) of the Coca-cola-fed rats was acutely damaged. The villi plays an important role in the exchange of biological chemicals between the intestine and the blood. Furthermore, coconut water was found to increase the antioxidant activity; Coca-cola had no such effects. Antioxidants neutralise the effects of oxidation, and thereby give a boost to the immune system.