The Joint Parliamentary Committee has finally delivered its verdict. Affirming that the Centre for Science and Environment's findings about the presence of pesticide residues in aerated water were correct, the panel dismissed as hot air soft drink manufacturers' claims that their products are safe 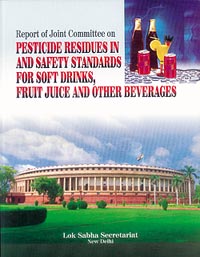 the Joint Parliamentary Committee (jpc) has finally delivered its verdict. Affirming that the Centre for Science and Environment's (cse) findings about the presence of pesticide residues in aerated water were correct, the panel dismissed as hot air soft drink manufacturers' claims that their products are safe.

It was cse which blew the lid off the matter when it released a report on pesticide residues in 12 major cold drink brands sold in and around Delhi (see: "COLANISATION'S DIRTY DOZEN", Down To Earth, August 15, 2003). cse had pointed out that regulations for pesticide levels in soft drinks are weak in the country. Neither the Prevention of Food Adulteration Act, 1954, nor the Fruit Products Order explicitly deals with the subject. The study also highlighted the fact that India has no standards to define 'clean' or 'potable' water, and asked the Union government to put in place legally enforceable water quality norms.

The expos sent Coca-Cola and PepsiCo, whose products were found to be contaminated, into a tizzy. The two archrivals even addressed an unprecedented joint press conference, rejecting cse's findings. The issue also figured prominently in the monsoon session of parliament, with members of the Lok Sabha (ls) as well as Rajya Sabha demanding the setting up of a jpc to probe the matter after the government released its verdict, which members saw as a 'clean chit' to companies.

On August 22, 2003, the Union government tabled a motion in the ls for the constitution of the committee. The jpc comprised 15 members from both the houses and was headed by Sharad Pawar. Significantly, it was the first ever jpc to have been constituted on a public health issue in post-independence India.

The committee's terms of reference required it to ascertain the veracity of cse's study, and suggest criteria for evolving suitable standards for soft drinks and other beverages. After almost six months of deliberation, during which parties --including cse and the cola companies -- were heard out, the panel presented its report in parliament on February 4, 2004.

The jpc completely endorsed cse's findings on various aspects. It lauded the organisation's effort to draw attention to issues concerning public health, concluding that "... cse stands corroborated on its finding pesticide residues in the carbonated water". It further noted: "The Committee...finds that the cse findings are correct on the presence of pesticide residues in carbonated water strictly in respect of the 36 samples of 12 brand names analyzed by them. The Committee also appreciates the whistle blowing act of cse in alerting the nation to an issue with major implications for food safety, policy formulation, regulatory framework and human and environmental health."

The jpc waved aside various frivolous questions raised by the cola giants about the reliability of cse's findings. A case in point was the confusion the companies were trying to create regarding malathion, an organophosphate pesticide. They asserted that while cse had detected the chemical in the samples that it had tested, the Central Food Technological Research Institute (cftri), Mysore, and Central Food Laboratory (cfl), Kolkata, had not found the same.

The jpc attributed the non-detection of malathion by cftri and cfl, and the different quantities of other pesticides in the samples of all labs to "variations in different batch numbers [of the products], manufacturing locations and also the dates of collection and analysis". It observed that malathion was found by two other labs apart from cse's -- the Central Pollution Control Board laboratory and Shriram laboratory (Bangalore). "The presence of pesticide residues, therefore, is a common scientific finding of all the three laboratories [cse, cftri and cfl]," it added.

Subsequent to the release of the cse report, the cola companies had launched an ad blitz extolling the purity of their products. The jpc report has slammed these advertisements and described them as "misleading". Despite this the companies continue to harp on the issue of safety. Press statements issued by both Coca-Cola and PepsiCo, in response to the jpc report, talk about quality consciousness and the application of stringent international standards. Sanjeev Gupta, president, Coca-Cola (India), has reportedly said: "Our products manufactured in India are world-class and safe." However, their explanation does not find too many takers now.

The jpc has addressed a number of larger issues that cse has consistently raised. In this regard, it has made several recommendations too (see: 'For India, with fizz', p23).

Meanwhile, Union health minister Sushma Swaraj announced that a meeting of the Central Committee on Food Safety (ccfs) had been convened on February 13 to discuss the jpc report. "The ccfs will come out with stringent norms for cold drinks as recommended by the jpc," said Swaraj.