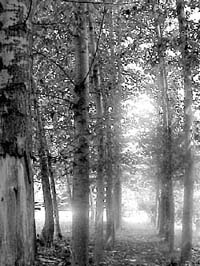 poplars in India, particularly exotic species, are highly susceptible to pest attacks, both in nurseries and plantations. A number of indigenous species, too, are soft targets to insect attacks. This has often led to serious economic losses, especially when more than half of the foliage is lost.

So far, about 120 insect species have been associated with damage to various poplar species in India. While most of them are casual visitors, a few of them are a real menace and threaten to jeopardise the successful cultivation of poplars (The Indian Forester , Vol 125, No 9).

In nursery beds, roots of poplars in general have been found susceptible to white grub damage during May to June.Appreciable loss due to white grub attack has been recorded at Shilli Nursery in Solan, Himachal Pradesh.

defoliators: Chrysomela populi is an important defoliating beetle and is found in the temperate Himalayan region from Kashmir to Arunachal Pradesh. This pest now threatens to spread to forest nurseries too. The Indian gypsy moth, Lymantria obfuscata , is another pest, which has infested poplar plantations in the Himalaya. The larvae feed mostly during dawn and dusk between the months of June and July. The severely infested trees rarely survive. Plagiodera versicolora is another leaf beetle which infests the foliage from April to June. Heavily infested trees become brown by September end.

stem and shoot borers: The menace posed by borers has assumed significant proportions in recent years. While the adults feed on foliage and tender bark, the larvae bore into the wood. Several species of bark and sapwood-boring beetles are of great concern in dry areas. Larvae of Capnodis kashmirensis , a stem borer, cause considerable damage. Then there is Chrysobothris femorata , which attacks mostly newly planted or drought-affected trees. Young trees are often girdled and killed. Other stem borers include Aeolesthes sarta and Apriona cinerea (common in northwest India). Among shoot borers, Eucosma glaciata attacks young plants in the northwest Himalaya, while Indarbela quadrinotata infests older trees.

sap suckers: Sap sucking pests affecting poplars mainly include aphids and scale insects. Aphids feed on leaves and tender shoots and cause stippling, browning and ultimately defoliation of leaves. Several of these insects are also suspected of transmitting diseases and other infections. Scale insects attack shoots, stems and twigs of young trees, resulting in death of the affected plants. Aphids chiefly include Aphis populi and Chattophorus poplus , while Quadraspidiotus perniciosus has emerged as the most dangerous sap sucking insect.

termites: In the terai (plain) region of Uttar Pradesh, termites have posed a serious problem. They include Heterotermes indicola , Coptotermes heimi and Odontotermes distans . The termites gain entry through the roots or injury on the stem near the ground level. Having gained entry, they work upward and ultimately make the tree hollow.