US scientists evolve way to sequester carbon dioxide in soil 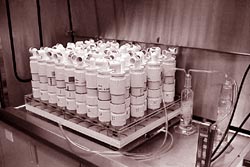 us chemists have found a way to promote soil's natural ability to soak up the greenhouse gas carbon dioxide. As per the findings of James E Amonette and his co-researchers from the us department of energy, maintaining a proper alkalinity level plus frequent watering can coax the soil to retain more carbon dioxide. "Until about 30 years ago, tillage released more carbon dioxide into the atmosphere than the burning of fossil fuels. Some soils have now lost one-third of their carbon. These are a tremendous reservoir to sequester carbon dioxide," claims Amonette.

During a series of experiments, Amonette and his colleagues promoted the activity of tyrosinase -- an enzyme that catalyses the soil's humification process. This process involves the gradual incorporation of carbon from dead plants and microbes into stable organic matter called humus. Tyrosinase increases the reaction rate between oxygen and humus precursors, such as phenols and hydroxybenzoic acids, to form quinones. The quinones react with amino acids released by soil microbes to form complex, durable molecules called humic polymers (humus). "The polymers diffuse into small pores in soil aggregates where they are stabilised for decades, thereby retaining the carbon dioxide," explains Amonette.

The humification rate depends on many factors: enzyme stability, moisture level, oxygen availability, microbial population, alkalinity and other physical properties of different soils. Amonette's experiments were designed to weigh the importance of these factors and to learn ways they might be manipulated to increase humification.

He was particularly interested in identifying soil components and additives that might improve tyrosinase's natural ability to promote humification. He found that the alkaline, porous fly ash speeds up the normal humification process by promoting the reaction of the quinones with the amino acids. Frequent cycles of wetting and drying the soil were also found to be important for fostering a rich microbial community, which supplies many of the humic precursors.

Amonette is eager to put these results to test where it matters the most -- fields. But before doing so, it is imperative to assess the viability of the process in context of the ecobalance.