INSTITUTIONAL investors have found the right formula to tide over the contagious recession and unstoppable inflation in Europe and North America: invest in trees. A recently released survey of the UN’s Food and Agriculture Organization (FAO) finds that more and more institutional investors are putting in money in forestry to protect their investments from spiralling down. The survey covered 42 investors having US $32 billion worth of investments in forestry. 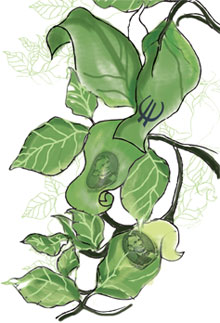 Forests and plantations across the world provide a US $300 billion worth of investment opportunity. Around 1,000 investors have invested US $50 billion in forestry in Europe and North America alone. Though 70 per cent of the current investment in forests are in North America, Europe is fast catching up due to the ongoing recession in the continent. There are indications that Asia and Africa will be the next hot spots.

Unlike other investment avenues that are linked to the market situation, trees grow independently, adding value and volume over years. “Trees do not depreciate. They only appreciate,” says Manindra K Tiwari, a Delhi-based finance analyst who advises on major investments. Investors enjoy multiple returns from the tree as it has different uses at different stages of its life. The demand for timber has been increasing in emerging economies like China.

This is a stark departure from the earlier trend when only companies dealing with wood related businesses like pulp and furniture invested heavily in trees as source of raw materials. Since mid-2000s, insurance companies, pension fund managers, wealthy households and even government bilateral finance banks have started parking a part of their investments in trees, popularly called timberland. According to the FAO survey, most of the investors preferred spending on trees than on wood related industries. The survey clearly shows that natural forests are not the preference for the inflation hedging investments. The new institutional investments are being made mostly on plantation forests.

“Diversification and inflation hedging were the primary reasons for investing in forestry,” finds the FAO survey, titled Timberland in Institutional Investment Portfolios: Can Significant investment Reach Emerging Markets? The trend is now limited to Europe and North America. North American countries account for 50 per cent of such investment assets. However, companies from the two continents have started showing interest in Southeast Asia. David Brand, managing director of New Forests, says, “This is the start of a growing trend towards institutional investment in sustainable forestry in the Asia Pacific Region.”

Though forests emerged as an investment avenue in the 1970s in the US, it was during 2001-04 when the market crashed and investors suffered heavily due to the technology bubble burst that non-forestry investors showed interest in trees. The latest economic crisis tilted the trend to Europe. There are now more European investors in the new forestry business than American. According to the FAO survey, investors park 5-10 per cent of their investments in forestry. The survey found that investors cited India and China as the two emerging timber consuming markets that will make their investments safe and sound in returns.

According to widely-quoted US investor Jeremy Grantham, investment in timber gives an annual return of around 11.6 per cent per year which is similar to stock investments. But there is an added advantage: return from timber has been consistent for the last one century. According to UK Forestry Index, investment in trees gets a 10.4 per cent annual return. The National Council of Real Estate Fiduciaries of the US puts it at 15 per cent. “In the current situation, they are the best avenue for investment,” says Tiwari.