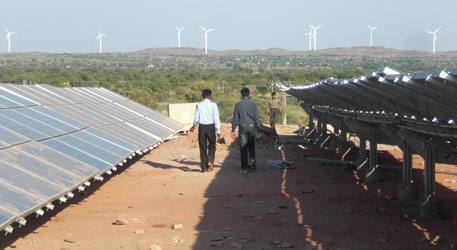 The Ministry of New and Renewable Energy (MNRE) recently released data of power generation from solar plants constructed under the Jawaharlal Nehru National Solar Mission (JNNSM) for the month of November. And the results span from very good to dismal.

November means short days for the solar plants, but according to Vineet Mittal, managing director of Welspun Energy, a solar power developer: “November is one of the better months with no rain or dust and with lower temperatures, closer to the conditions they are made for, increasing output from the cells.” Efficiency of Solar Power plants is measured by the Capacity Utilization Factor (CUF), that is, how much of the stated capacity a plant actually generates compared to its total possible capacity in a laboratory with constant light. The higher the CUF, the more efficient the plant is at producing energy from the sun. Due to weather and the unmissable fact that the sun is only available half the day, a 5 MW plant is expected to generate about 1 MW of electricity per hour on an average.

The Central Electricity Regulatory Commission (CERC) has set 19 per cent CUF as the norm. Of the 30 planned 5 MW photovoltaic (PV) solar power projects in the first batch of the solar mission, only 21 plants are reporting any production—a few of the plants were cancelled at bidding or due to delays—but about 20 MW of capacity is still missing from production figures. The producing plants have an average CUF of 19.48 per cent. All but four of the reportedly generating plants are situated in Rajasthan.

Videocon-backed Northwest Energy's 5 MW project in Rawra village in Jaisalmer district has the best figures for managing CUF of 23.60 per cent in November with an output of 839 MWh of clean power. That is enough to provide power to about 12,500 people.

While most solar power projects have been built in Rajasthan, one project doing well is Welspun Energy's 5 MW plant in Thummala village in Anantapur district of Andhra Pradesh with a CUF of 21.71 per cent with an output of 771 MWh, which is enough for 11,500 people. Mittal says, “High generation comes from investing in talent, finding the right location through radiation data and using the right solar modules for the right area. The same technology may not be optimal in all parts of the country." On why Welspun Energy opted for Andhra Pradesh while most projects under JNNSM have been set up in Rajasthan, he said: "We wanted to explore more arid zones of the country and our plant generating as much as those in the northwest of the country shows that other states are feasible."

The worst performing 5 MW projects (among the ones producing any noticable output) is EMC Limited in Uttar Pradesh. with a CUF of 14.97 per cent.

As part of the JNNSM a separate programme, the Rooftop PV and Small Solar Power Generation Programme (RPSSGP), was set up for 1-2 MW PV solar power plants. The generation figures for these plants are more varied, but generally much worse, averaging a CUF of only 15.56 per cent for November. Although the Indian Renewable Energy Development Agency (IREDA), the agency in charge of the RPSSGP, is reporting that 69 projects have been commissioned, only 38 of those are reporting generation data with few plants reaching expected output levels. As Mittal states, "Many developers are coming into the market right now with little experience. A solar power project demands good engineering and the smaller projects may have come in with little background in solar.”

The Gujarat State Mission with an installed capacity of 702 MW, more than half of all capacity in the country, is reporting an overall average CUF of 18.8 per cent for the state in November,  according to the Gujarat State Load Dispatch Centre.