Somalia on verge of being hit by famine 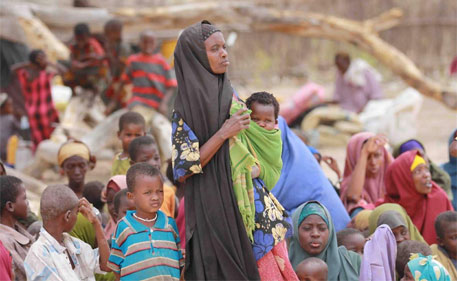 War-torn Somalia is sliding into an acute hunger crisis with parts of the capital facing emergency levels just short of famine, the United Nations (UN) warned on Monday. The ultimatum has come days after UN and other international agencies had declared that almost four million people were expected to be hit by possible famine in another strife-torn country, South Sudan, if they did not receive immediate attention.

Along with these two, many other conflict-affected countries in the region are at greater risk of food insecurity.

"Somalia's food security crisis is expected to worsen over the next several months following poor performance of the major rainy season, shrinking humanitarian assistance and access, increasing malnutrition, conflict and surging food prices," the UN's Food Security and Nutrition Analysis Unit (FSNAU) said. In Mogadishu, the country’s capital and largest city, the crisis, according to the UN, is expected to spiral into "emergency" phase, just one step short of famine on its classification scale of hunger. Prices of grain in the country have soared by up to 60 per cent since March.

In dire need of assistance

The warning, for many, would also serve as a reminder of the 2011 famine that affected over 13 million people across the Horn of Africa and claimed lives of over 250,000 people, half of them children. A few leading aid organizations, at that time, had accused the failed efforts by international community for the “needless” deaths in the continent.

Earlier on June 4, 2014, UN Undersecretary General for Humanitarian Affairs and Emergency Relief Coordinator, Valerie Amos, had called for US $60 million in emergency funds for Somalia through summer months. She noted that the money is needed to prevent the African country “from slipping back into a major humanitarian crisis”.

Al-Qaeda-linked Shebab insurgents who once controlled most of southern and central Somalia have now been driven out of fixed positions in Mogadishu. But they still continue to launch regular attacks against the fragile internationally-backed government in Mogadishu, which is also the city where thousands displaced by the civil war live.

Among those displaced civilians, "rates of acute malnutrition and mortality levels have surpassed emergency thresholds", the UN said, adding that countrywide, over 200,000 acutely malnourished children under the age of five "require urgent treatment".