Something in your ear? 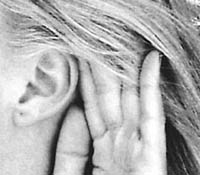 every year, loss of hearing affects a significant number of people worldwide. The causes are varied, ageing and accidents being the most common. However, in some instances, hereditary factors also play a crucial role. In fact, these are responsible for as much as 60 per cent of the 28 million cases of hearing loss reported in the us annually . Furthermore, 70 per cent of all such cases of hereditary deafness is "non-syndromic," or is not associated with other disabilities such as simultaneous loss of sight.

The most recent study on non-syndromic deafness has been conducted by Eric D Lynch and his colleagues from University of Washington in Seattle, usa, and Pedro E Leon of University of Costa Rica. Lynch and his team concentrated on a single extended family in Costa Rica, which they called the "M" family. With over 400 members, the M family afforded an ideal setting for the team to make detailed studies of the disease.

The family, of Spanish descent and with a history of 300 years, is medically unique. Historical records show that since 1700, its members have exhibited a peculiar tendency of going deaf very early in childhood, around the age of 10. Today, about half of the M family members exhibit non-syndromic deafness.

It was evident that deafness within the M family was due to a shared genetic factor. Therefore. isolating what was common to the deaf members but absent in their normal kin was an easy task. Lynch's team found that at least half the children born to a deaf parent were prone to deafness. The team established this from a family tree of about 190 members spread over the last eight generations.

This pattern suggested that the genetic change responsible for deafness was dominant. Therefore, it was sufficient if one copy of the two carried by a person was mutated, even if the other was normal. The genealogy showed that the original mutation must have occurred in a common ancestor born in 1713 (Science , Vol 278, No 5341).

dna studies carried out in 147 family members enabled the gene to be mapped accurately to the fifth chromosome (humans have 23 chromosomes, each occurring as a pair). The team then sequenced the cloned dna. When compared with previously known dna sequences, the "deafness gene," designated dfna1 , closely resembled the Diaphanous gene found in the fly Drosophila and a dna sequence of unknown function usually found in mice. After the amino-acid sequence in the dfna1 gene was estimated, it turned out that the common factor shared by all affected individuals of the M family was the replacement of the nucleotide base guanine to thymine. This led to the rearrangement of the coding regions of the gene and caused a major defect in the resulting protein.

The normal human Diaphanous gene is expressed in the development of organs such as the brain, heart, lung, kidney, skeletal muscle and placenta. It is also expressed in the development of the cochlea, a crucial part of the inner ear. The inner ear is small but a very elaborate structure deeply embeded in the temporal bone. It includes two distinct organs, one for hearing and the other for balance. The first is the cochlea, a snail shaped container in which vibration (sound) produces nervous impulses for transmission to the brain. The receiving cells are arranged on a flat membrane dividing the cochlea into two spiral compartments. The hair-like filaments of the membrane gradually increase in length towards the apex of the spiral, acting as resonators.

The function of the Diaphanous gene remains unclear. However, its resemblance to genes found in organisms such as yeast suggests that it mediates in the formation of actin polymers in hair cells. Actin is a protein whose proper organisation is necessary if the tips of the hair-like fibres in the cochlea are to bend correctly when sound causes the fluid surrounding them to vibrate. Despite the fact that actin plays a crucial role in many tissues and that the Diaphanous gene is expressed more or less everywhere, why deafness is the only defect observed in individuals carrying this dfna1 mutation remains a mystery.

Surprisingly, all three genes recently implicated in human deafness affect the functioning of cochlea. Work on a mouse mutation known as Shaker 1 showed that the deafness was due to a mutation in a gene encoding myosin, a protein that interacts with actin. British researchers found that a mutation in the myosin gene of humans led to Usher Syndrome, a form of deafness that eventually causes blindness as well. They suspected that a different mutation in the same gene might also cause non-syndromic deafness. That suspicion now stands confirmed.

Another gene implicated in deafness was identified by geneticists as a result of an accident. During a search for the genetic basis connecting skin problems with deafness, researchers stumbled on connexin 26, a gene that was responsible for deafness but not skin problems. Connexin 26 encodes a protein known to build junctions between cells for the passage of electrical and chemical signals. It is speculated that in the cochlea, such junctions pump out the potassium ions that enter hair cells following stimulation by sound. A defect in these junctions may make this process difficult, even impossible, and it is difficult to "reset" the hair cells so that they can respond to sound once again.