The two sides of Auto Expo 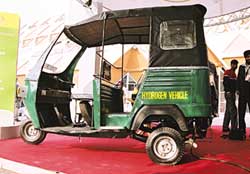 asia's largest automotive show -- the Auto Expo -- is conspicuous not by the business generated or the number of visitors but by the congestion it creates on the Delhi-Mathura road every two years. Never mind that the just concluded Auto Expo 2006, held at Pragati Maidan, attracted more than a million visitors and generated business worth more than Rs 10 crore. If only one could estimate the cost of congestion during the expo, the eighth so far, it might show the entire jamboree in a different light.

In the passenger-vehicle segment, the Mahindra group stole the show with Scorpio Hybrid, India's first sports utility vehicle (suv) with a hybrid powertrain. Equally stunning was Mahindra Hydrogen Alfa, the first hydrogen engine (three-wheeler) that uses compressed hydrogen -- a novel concept. The launch of yet another suv, Rhino by the International Cars and Motors Limited, came as a surprise.

In the bus category, the Volvo 8700 dazzled everybody. Also on display were some swanky motorcycles from Suzuki, Yamaha and the others. Bajaj's Pulsar dts -Fi (Digital Twin Spark -- Fuel Injection) gave some hope for a fuel injection bike on Indian roads. Electric two-wheelers also attracted attention.

The Indian auto industry is growing at a blistering pace and contributes 4 per cent to the gross domestic product, and nearly 5 per cent to the total industrial output. The industry is the fourth largest car market of Asia, not to forget that it is also the second largest two-wheelers manufacturer in the world.

But other important statistics are often overlooked. The average annual compound growth rate of petrol sales has hovered around 7 per cent over the last decade. The crude oil import bill has increased from Rs 76,195 crore in 2002-2003 to Rs 117,032 crore in 2004-2005. Delhi's car population equals those of West Bengal, Kerala and Andhra Pradesh put together. And average speeds in the capital during rush hours are just 10-15 km in central areas, which have been falling steadily due to increasing congestion.