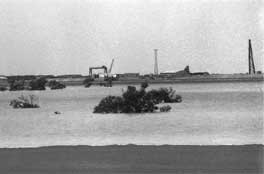 a gujarat high court order, directing the Union government to reconsider the request of Sanghi Industries Limited (sil) for permission to put up a captive jetty in the Khauthar belt in the reserved forests of Kutch, has brought into open many startling facts about the project that has already drawn flak from environmentalists and other pressure groups. On February 23, the court quashed the order of ministry of the forest and environment (mef) that denied environmental clearance to the company for setting up of the jetty. The government has been given two months for reconsideration.

Sanghi Cements found the Kauthar belt suitable for putting up a jetty. Subsequently, they sought that land on a permanent lease. sil prepared their plan in such a way that the land it demanded, was in Gunav village which was not surveyed. The forest authorities found the area to be outside the reserved forest and so did not raise any objection. Consequently, sil obtained sanction to get possession of the land.

The truth, however, is not quite so simple. The land, contrary to sil's claims, remains very much within the reserved area. That the company had submitted a doctored plan to the forest authorities is now clear.

The nature of the land that has been assigned to the sil by the state also demands a closer examination. Though the sil was allotted 250 hectares (ha) of land at village Gunav, the land that the company took was the one at Village Arki. The two villages, though adjoining, are located in two different talukas. After getting the allotment, the sil wanted to alter the description of the property. Surprisingly, the government permitted the change.

It remains unclear under what provision of law, this change has been effected. The land, supposed to have been acquired by sil at Mamlatdar of Lakhpat Taluka, has now been changed to be that in Arki Village in Abdasa Taluka. The steps taken by the state government and district collector show that they were prepared to give away the land to the company without even verifying its nature and location.

The judgement also exposes the fact that the jetty for which environmental clearance is being sought is, in fact, an unauthorised construction. "As a result of the above discussion, we come to the conclusion that Kauthar belt forms part of reserved forest and Sanghi Cements to be in possession of the same for putting up a captive jetty. Substantial work for that has been carried out without any permission from the Union government."

The company sought clearance from the Gujarat Pollution Control Board separately for different parts of the project instead of a single clearance for the entire project with cumulative effects.

"On June 16, the government of India, informed Sanghi Cements that since the cost of the captive jetty facilities is less than Rs 50 crore, environmental clearance from mef was not required. However, Sanghi Cements was directed to take the approval of the ministry for the facilities proposed to be located within 500 metres of high tide line as per Coastal Regulation Zone Notification. This direction given to Sanghi Cements to get approval under the coastal Regulation Zone Notifi-cation has not been fulfilled till date."

Advocate Girish Patel, leading public interest activist, finds it difficult to digest sil's claim and also the observation of the court that the Rs 1,000 crore industry will be a boon to the backward district and will provide employment and prosperity to the people of Gujarat. He says it will only employ about 750 people , 450 of whom will be the scientific staff.