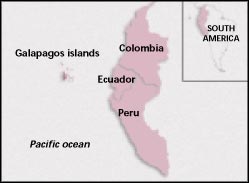 finches -- the basis of Darwin's theory of evolution -- are facing a grave threat. Larvae of parasitic flies are feeding on nestling finches in Ecuador's Galapagos islands. This was revealed in a study conducted by ornithologists from Vienna-based Konrad Lorenz Institute (kli). It has been found that on some islands, fly larvae have infested the nest of nearly every bird. At night they emerge and feed on the chicks, drinking their blood and burrowing into their flesh.

In their study, Philornis downsi -- a recently discovered parasite on the Galapagos archipelago -- a threat for Darwin's finches, kli researchers report on the nestling mortality of 12 native and introduced finch species affected by the parasitic larvae of three fly species. The predominant parasite is Philornis downsi. The fly probably arrived in the Galapagos in a shipment of fruit or vegetables, opines Birgit Fessl, one of the kli researchers.

Overall, the researches found an average of more than 23 parasites per nestling and a relatively high nestling mortality of 27 per cent.

The researchers say it would be wrong to assume that the parasites are directly responsible for the nestling deaths. But they rule out malnutrition as the cause. According to them, the infestation may have severely weakened the nestlings because birds with holes in their back, neck and under the wings were discovered. Previous studies indicate that parasites evolving a host-parasite relationship do not seriously harm their host population. But those brought into parasite-free populations may cause severe damage before defence mechanisms of the host evolve. This has happened in the past. "For example, in the Hawaiian Islands, the accidental introduction of the mosquito Culex pipiens -- a vector for avian malaria -- led to the extinction of several endemic bird species during the 19th century," says Nigel Collar of the conservation organisation BirdLife International, based in Cambridge, the uk.

According to him, the parasitic attack might lead to the extinction of one finch species that is listed as critically endangered. "Most worrying is the presence of these new parasites on Isabella Island -- the only place in the world where the critically endangered mangrove finch Camarhynchus heliobates dwells. This is the most threatened of the finch species studied by Darwin. Only 110 of them survive across the world," says Collar.

Many ornithologists, including Fessl, assert that the impact of the parasites may be quite drastic if considered in the long run. They are quite clear that further studies are urgently required. "Immediate steps should be taken to eliminate the parasitic flies," says ecologist Peter Grant of New Jersey-based Princeton University, who has studied the finches for more than 30 years.

One way out is treating the nests with insecticide, but some experts do not find it feasible. "You can't go around fumigating every finch nest for eternity," says Collar. The treatment could only be used in desperate cases, he says, such as to protect the mangrove finch.

The best hope, says Collar, is that the finches would learn to live with the flies. And if Collar's wish does come to pass, it would provide solace about other species being able to cope with similar parasitic attacks. If nothing else, it would be a consolation for the ardent lovers of Darwin's theory.