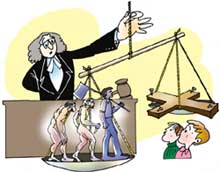 In a classic clash between religion and science, a us federal judge has ruled against the concept of 'intelligent design' (id), calling it creationism in disguise. District judge John E Jones termed the inclusion of id in science classes as a violation of a constitutional ban on teaching religion in public schools.

The decision came after 11 parents sued the Dover High School Board of Education, Pennsylvania, for teaching id on the same footing as established scientific theories like the theory of natural selection.

The court ruled that the Dover Area School District acted illegally by including id in ninth-grade biology classes. It condemned the "breathtaking inanity" of the policy followed by the school board, all but one of whose members have now been ousted by local voters.

id holds that some aspects of nature are so complex that they must have been the work of an unnamed creator rather than being the result of random natural selection, as argued by the theory of evolution.

The judge said the concept was premised upon a false dichotomy, namely, that to the extent evolutionary theory is discredited, id is confirmed." In his ruling, he stated that id is primarily a religious theory and not a scientific one -- a view that reflects the arguments of id's strongest critics.

The court added that by depending on a supernatural cause, the id theory violates the rules of science. The proponents of id presented the immune system and blood clotting as examples to argue their case. But the judge said natural explanations existed for these processes.

However, the Discovery Institute, a Seattle-based think tank, which promotes the idea of id, issued a statement charging that the Dover decision is an attempt by an activist judge to stop the spread of a scientific idea through government-imposed censorship. The ruling has been a major setback to Christian conservatives who support the concept of id. Though the decision is legally binding only within the Pennsylvania middle district, it might convince other school boards in the us to also remove id from their syllabus.