Source of the scourge 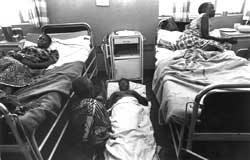 DID modern medicine inadvertently give birth to one of the deadliest diseases of the 20th century? This is the question that is currently haunting medical circles . It is triggered by a hypothesis that points to a chilling linkage between large-scale use of penicillin injections and the origin and spread of AIDS.

The bombshell was dropped in an article titled 'The Injection Century', in the December 8, 2001, issue of The Lancet. Its principal author, E M Drucker, PhD, of Montefiore Medical Center's Department of Epidemiology and Social Medicine in the US, traces the spread of AIDS to unsterilised hypodermic needles used in Africa in 1950s. Drucker and his team explain in the research how a relatively harmless monkey virus called Simian Immunodeficiency Virus (SIV) could have mutated into the deadly AIDS virus as a result of the repeated use of unsterilised hypodermic needles among 23 million Africans to whom penicillin was administered during the 1950s. The fallout from this could be the current spread of AIDS.

"It would be a cruel irony if the introduction of antibiotics into Africa should be associated with the origin of the HIV pandemic," say Drucker and co-authors P G Alcabes, PhD, of Hunter College School of Health Sciences, and P A Marx, PhD, of the Aaron Diamond AIDS Research Center at The Rockefeller University. The researchers say that while hunting and slaughtering monkeys, the African hunters were infected by the relatively harmless SIV. But this did not cause HIV. The monkey virus later transformed into AIDS because of a process called 'serial passage'.

How did this process occur? According to the researchers, in the 1950s, a UN-sponsored mass campaign to combat yaws (a contagious bacterial disease of tropical countries) and other diseases was launched. During the drive, unsterilised syringes and needles were used extensively. The researchers hypothesise that 'serial passage' occurs when patient A - infected with a simian virus through a splash of monkey blood in an open cut - receives an injection. When the same needle, carrying patient A's contaminated blood, is reused, the virus is transmitted to patient B. The authors explain how the virus adapts to its host's immune system through mutations. It is not only the injections of illicit drugs but also drugs authorised to be used in medical practice which are causing spread of AIDS and Hepatitis C virus, say the researchers in their findings. They outline that despite the growing incidence of AIDS, the World Health Organisation still recommends re-use of syringes up to 200 times in vaccination programmes relying on sterilisation routines which are not adhered to.