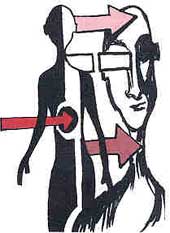 PARTICLE accelerators are among the most sophisticated machines built by humankind. The precision which drives these machines, the magnitude of the accelerator facilities and the sophisticated electronics which are the machines' hallmark, are usually the results of a collaboration of many people. The technology also has many spin-offs in areas like material science and medical diagnostics.

x-ray sources, used extensively by material scientists, are a direct result of advances in accelerator technology. Currently, the x-ray sources which are in operation the world over use electron storage rings. These are, basically, accelerators -which speed up beams of electrons to high energies and force them into a circular path using very powerful magnets. This current generation of x-ray sources accelerates electrons to about eight billion electron volts, passing them through devices called 'wiggleers' and 'undulators', where they produce thin beams of x-rays.

These pulses are then used to study materials or carry out other experiments requiring x-rays. The pulse size depends upon the bunch size of the electrons in the accelerator. Scientists from the world over have agreed to investigate the possibility of building better x-ray sources using a radically different approach. Instead of using circular tracks for the electrons, the new proposal envisages using linear accelerators and free-electron lasers.

The electrons, when fed into free-electron lasers, emit x-rays which are much brighter than the other devices. There is, however, a problem with using the lasers: the mirrors in these devices are not suitable for x-ray wavelengths. The scientists, therefore, propose to use a principle called SASE (Self-Amplified Spontaneous Emission) which will solve the problem. This has, however, not been demonstrated experimentally at the required wavelengths. Though still in the design stage, the fact that there is a consensus in the international- community about the new technology points to the possibility that residual problems will be solved. It is hoped that in the next 15-20 years, the x-ray community will be using these fourth generation sources extensively.