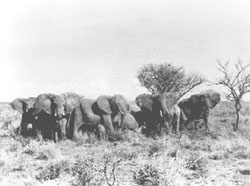 Elephants of the Kruger National Park are once again in the centre of a controversy. Recently, the park officials introduced contraception as an alternative to culling to control the exploding numbers of the pachyderms. Last month, South African and American scientists injected 21 female elephants with pig zona pellucida (p zp ) protein to sterilise them. However, Hank Bertschinger of the University of Pretoria, said that the animals will not be permanently sterilised.

But conservation groups and local communities are not happy. Reducing the number of elephants, conservationists say, would deprive the communities from earning a livelihood. The best way to check the elephant population, they believe, is to provide hunting licences to the locals. The Africa Resources Trust, a local group, is lobbying with the backing of the local branch of the World Wide Fund for Nature for the right of African people to hunt wildlife on a sustainable basis.

The elephants are also pushing out local people from their lands. "We were moved out of there for Kruger to become a place of animals. We are the ones who suffer when the elephants come and destroy our fields," complains Alvis Madhlope, a village leader.