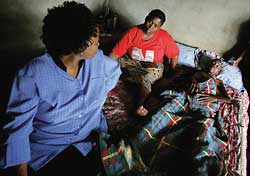 More than 30 people suffering from extreme- or multi-drug resistant tuberculosis (tb) in South Africa ran away from a hospital in Port Elizabeth in the last week of March. The patients forced their way out of the Jose Pearson Hospital after taking off their protective masks and intimidating security guards. They wanted to visit their families over Easter.

The patients were being held in isolation because of the risk they pose to their communities and to ensure that they comply with their medication instructions. Some of the patients voluntarily returned to the hospital a few days later, while some were brought back by a court order. Two patients are still at large. Authorities are preparing to screen the people, whom the patients had visited, for tb.

Both multi-drug resistant (mdr) and extreme-drug resistant (xdr) tb can develop when patients fail to take prescribed medication and, in some cases, through direct transmission. South Africa, where more than 50 per cent of the population is suffering from tb, is desperately trying to curb its heavy caseload. About 8.8 per cent of the tb patients do not take medicines regularly. Prevalence of hiv/aids further aggravates the problem.

The health minister, Manto Tshabalala-Msimang, on March 28 launched a us $4-million programme to trace tb patients who have stopped treatment. Speaking on the tb Day, the minister said that all nine provinces had established tb tracer teams of nurses and community health workers to follow up on patients who have stopped treatment. "These teams will visit homes to find patients so that they can put them back on treatment. The national health department has also deployed an additional 72 teams in sub-districts which have poor tb treatment rate," she said. The ministry has already allocated us $48 million to improve the condition of patients isolated in hospitals. "It is in the interest of the public as well as the patients that xdr and mdr patients remain in hospital until they are discharged," said Tshabalala-Msimang.