Measure taken to prevent animals from being poached 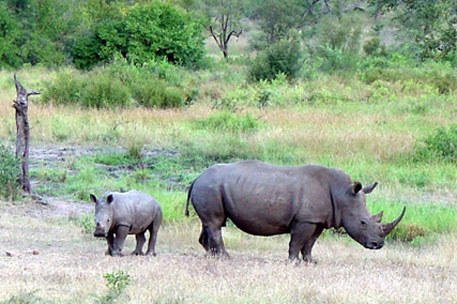 South Africa announced on Thursday that it had moved around 100 rhinos to unspecified neighbouring countries to protect them from falling prey to poachers.

A Reuters news agency report quoted the country’s environmental affairs minister Edna Molewa telling reporters that for security reasons, the precise countries where the rhinos had been moved would not be named.

Molewa said that 56 of the animals have been moved within the huge Kruger National Park itself, which is the country’s flagship government reserve - from danger zones to an "intensive protection zone."

The minister also said that another 200 rhinos will be moved in 2015 from Kruger to "strongholds" where the animals will be safer from poaching. The park's rhino population is around 9,000.

In August last year, the South African Government had approved the relocation of up to 500 rhinos from Kruger to sites both within the country and across its borders to combat a surge in poaching.

Thursday announcement came after government figures released on the same day showed the country had lost a record 1,215 rhinos in 2014, about a 20 per cent increase on the 2013 toll. South Africa is home to around 80 per cent of the global rhino population.

Rhinos are poached to meet soaring demand for rhino horn, valued as an ingredient in traditional medicine in Far Eastern countries such as China and Vietnam.