South Africa plans to move up to 500 rhinos from Kruger National park to counter a wave of poaching of the animals for their horns, highly prized in Asian countries

The South African Government has approved the relocation of up to 500 rhinos from the country's Kruger National Park to sites both within in the country and across its borders to combat a surge in poaching.

Discussions with Botswana and Zambia have started, Edna Molewa, the country's Minister of Environmental Affairs, said. On  August 6 the Cabinet decided to enforce the integrated strategic management of rhinoceros. Molewa said that the relocation will be a "mammoth task". The operation will involve tracking the animals in rugged and remote bush, darting them with tranquillisers from helicopters and then moving them.

South Africa has long been considered the custodian of Africa’s rhinos, with 18,796 white rhinos and 1,916 black rhinos as of last estimates at the end of 2010, and thus it is an important country for rhino conservation. But the country is struggling to protect the pachyderms against poachers, many of whom cross the border from Mozambique and enter Kruger armed with night vision scopes, silenced weapons, darting equipment and helicopters to carry out their mission. Rhino poaching has reached a crisis point and if the killing continues at this rate, rhino deaths could well overtake births between 2016 and 2018, meaning rhinos could go extinct in the very near future.

Figures compiled by the South African Department of Environmental affairs show the horrific escalation in poaching over recent years (see graph below). 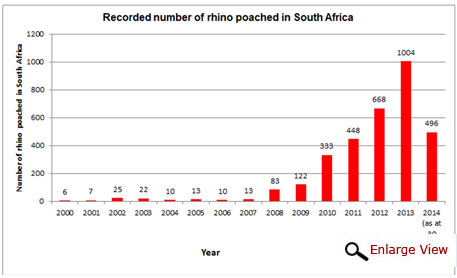 Poaching statistics released by the South African Department of Environmental Affairs has shown that 1,004 rhinos were illegally killed during 2013 in the country, the equivalent of nearly three animals a day, making it the worst year ever on record for rhino poaching in the country.

African rhino poaching has been fueled by demand from Asian medicine market, particularly China and Vietnam where rhino horn is ground into a fine powder or manufactured into tablets as a treatment for a variety of illnesses such as nosebleeds, strokes, convulsions, and fevers. According to the Convention on International Trade in Endangered Species, which monitors trade in wildlife products, there has also been a shift from medicinal use to flaunting rhino horn as a sign of wealth. Some conservationists estimate that rhino horn has a street value of $65,000 per kilogram, which makes it more valuable than platinum or gold.