A new community of nations is to be formed 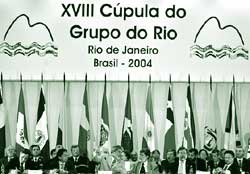 a community similar to the European Union will soon be created in South America. The Rio Group, a cluster of 18 South American nations, has agreed to form the "South American Community of Nations" to foster political, economic and infrastructural integration. The decision was taken by the foreign ministers of the countries at the group's 18th meeting on November 4, 2004. Leaders of the countries will meet again from December 7-9, 2004, in Ayacucho, Peru, to sign the charter instituting the new community of nations.

Brazil, the biggest economy in the group, believes the community would help counter-balance us supremacy in the region. But some Rio Group members have emphasised that the new grouping would not necessarily mean distancing from the us. "The South American community does not rule out stronger relations with the us," stresses Peru's president Alejandro Toledo. Brazil's foreign minister Celso Amorim also believes the community would improve the bargaining position of the countries. The new community will have a population of more than 360 million and its gross domestic product would be a sizeable us $800 billion, with exports amounting to us $188 billion. To reduce costs, there would be no headquarters or employees for now. The presidency would rotate among members. A constitution would be drafted within six months of the community's formation and would be submitted to each member's parliament for approval.

The integration move follows from the signing of an agreement between two trade blocs in the region, Mercosur and the Community of Andean Nations, in October 2004. While Mercosur comprises Argentina, Brazil, Paraguay and Uruguay, the Andean Community includes Bolivia, Colombia, Ecuador, Peru and Venezuela. Energy is expected to be the first step in the integration process, much like the eu. "A regional grid would ensure the whole continent's development," suggests Eduardo Duhalde, president of the Mercosur Permanent Representatives Committee.

The integration process has apparently gained impetus due to the presence of left-leaning governments in many countries, like Argentina, Brazil, Ecuador, Peru and Uruguay. But there are fears the group is fragile. Trade disputes between the region's two major economies, Argentina and Brazil, are frequent. Besides, many group members either depend on the us for aid and investment or are negotiating trade pacts with it, and are likely to be influenced. Critics of the move also claim it is utopian and a waste of money, but proponents argue that all integration projects begin with big ideas and are followed up with decades of work.