South Asia accounts for over one-fourth of the world's hearing impaired: WHO

Only 32 of the 76 countries surveyed have plans and programmes to prevent and control ear diseases and hearing loss, says report

Over five per cent of the world’s population, numbering almost 360 million people, are suffering from disabling hearing loss, according to a report published by the World Health Organization (WHO) last Friday.

South Asia leads the regions with high percentage of people with disabling hearing loss and contributing 27 per cent to the total number; it is followed by East Asia where 22 per cent of the hearing impaired live. 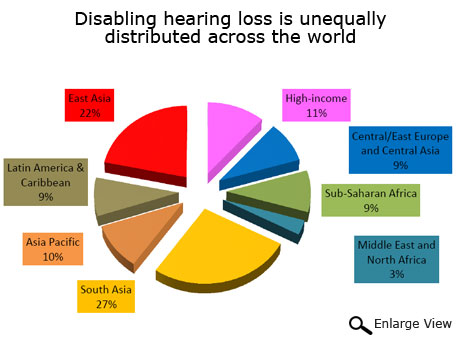 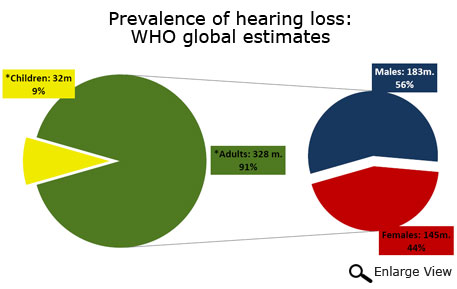 Contribution of South Asia in worldwide prevalence of hearing loss problem is higher not only in adult group but also in children as well. 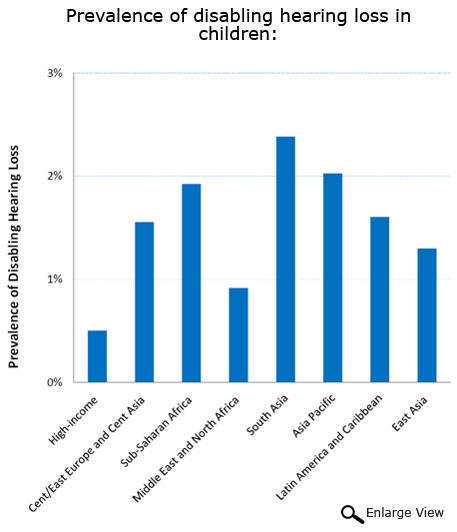 According to the report, approximately one-third of people over 65 years of age worldwide are affected by disabling hearing loss. The prevalence in this age group is also highest in South Asia, Asia Pacific and sub-Saharan Africa.

This is how WHO report defines hearing loss: “If a person who is not able to hear as well as someone with normal hearing—hearing thresholds of 25dB (decibel) or better in both ears—the person is said to have hearing loss.” Hearing loss may be mild, moderate, severe or profound. It can affect one ear or both ears, and leads to difficulty in hearing conversational speech or loud sounds.

“Hard of hearing” refers to people with hearing loss ranging from mild to severe. They usually communicate through spoken language and can benefit from hearing aids, captioning and listening devices. People with more significant hearing losses may benefit from cochlear implants. “Deaf” people mostly have profound hearing loss, which implies very little or no hearing. They often use sign language for communication.

The report points out various causes which lead to hearing loss in people. It includes congenital causes and acquired causes.

Hearing loss can be caused by hereditary and non-hereditary genetic factors or by certain complications during pregnancy and childbirth, which includes maternal rubella, syphilis or certain other infections during pregnancy, low birth weight, birth asphyxia (a lack of oxygen at the time of birth), inappropriate use of ototoxic drugs (such as aminoglycosides, cytotoxic drugs, antimalarial drugs and diuretics) during pregnancy, and severe jaundice in the neonatal period, which can damage the hearing nerve in a newborn infant.

The report says that acquired causes lead to hearing loss at any age. The cause may be infectious diseases such as meningitis, measles and mumps. Another acquired cause may be chronic ear infection, which commonly presents as discharge from ears, which can lead to hearing loss. In certain cases this condition can also lead to serious, life-threatening complications, such as brain abscesses or meningitis. There are a few other examples of acquired causes of hearing loss like collection of fluid in the ear, use of ototoxic drugs at any age, such as some antibiotic and antimalarial medicines, which can damage the inner ear.

Excessive noise, including working with noisy machinery, and exposure to loud music or other loud noises, such as gunfire or explosions, can also harm a person’s hearing. Among children, chronic otitis media is the leading cause of hearing loss.

The report points out that just 32 of the 76 countries covered in the report have developed any plan or programme to prevent and control ear diseases and hearing loss.

Many countries lack trained health personnel, educational facilities, data and national plans to address the needs of those living with ear and hearing problems. “The results of this survey are a clear call to action for governments and partners to invest in hearing care, especially at community and primary level,” says Etienne Krug, director of the WHO Department of Violence and Injury Prevention and Disability.