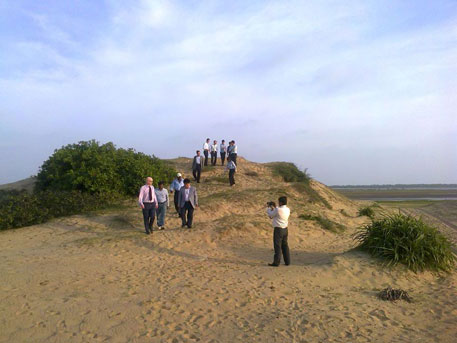 A meeting between South Korean envoy Joon-gyu Lee and chief minister of Odisha, Naveen Patnaik, earlier in the week has sparked fresh protests in the state over land acquisition for POSCO, a multinational steel company.

The envoy is understood to have urged the chief minister to speed up the land acquisition.

POSCO had signed an MoU with the Odisha government in 2005 for setting up a 12-million-tonne capacity steel plant. But constant resistance from villagers and other local people has not let the authorities acquire all the 1600 hectares of proposed land in Dhinkia, Nuagaon and Gadakujang gram panchayats in Jagatsinghpur district.

Also, the state government is said to have claimed that the district administration has acquired 1080 hectares of land for POSCO.

"The National Green Tribunal on March 30 last year suspended the environment clearance granted to the proposed plant of the South Korean steel major https://www.downtoearth.org.in/content/green-tribunal-cancels-posco-s-clearance. Now, a move by the envoy of South Korea to push the state government for acquisition is not only illegal but contemptuous," said Prafulla Samantray, president of people’s front Lok Shakti Abhijan. He added that the people there were shocked to know that envoy of South Korea was interested in the business of this private firm.

"Earlier, Saxena Committee and Meena Gupta Committee had stated that the Odisha government had violated the Forest Rights Act which states that no forestland can be given to anyone until all the rights of the people in the area are recognized and their consent is given to the project. This clause has also been acknowledged by an environment ministry order in August 2009," Samantray said.

He went on to criticize the Odisha government for allowing a 10-member POSCO team comprising six South Korean officials to visit the plant site last Monday despite the entry being banned by police for foreign nationals since 2012.

Sishir Mohapatra, general secretary of Posco Pratirodhaka Sangram Samiti, another organization opposing the establishment of the steel plant, said: “last year, Prime Minister Manmohan Singh had promised Lee Myung Bak, the president of South Korea, that he would help POSCO to build steel plant after acquiring fertile land. We are determined not to hand over any land to POSCO," said Mohapatra.