The southwest monsoon is set to hit the coast of Kerala on June 5, according to the forecast made by the India Meteorological Department.

The Trivandrum division of the Met department has issued a weather warning, stating that rainfall exceeding 7 cm will occur at isolated places till the morning of June 5. Fishers have been warned to stay away from sea as strong westerly winds will be blowing off the coast of Kerala over the next 24 hours.

Rainfall is expected in the southern peninsula regions as the conditions for advancement of monsoon are favourable and will be reaching the Andaman Islands earlier than expected. The southwest monsoon represents the beginning of the rainy season over this region. The Met department had issued a press release on May 15, stating that monsoon would set over Kerala by June 5, with an error of four days give or take. Usually, the southwest monsoon arrives on June 1. But since 2005, the Met department has been using a statistical model to issue operational forecasts that study predictors such as the minimum temperature over north-west India and pre-monsoon rainfall peak over the south peninsula. 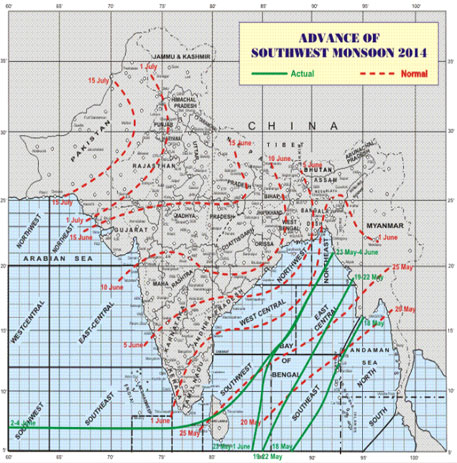 Feature: El Niño and the summer monsoon of 2014