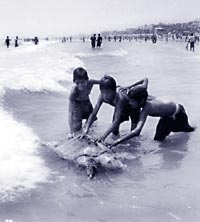 the much-awaited mass nesting of sea turtles has begun at the Rushikulya beach in Orissa. Till March 12, 2003, a total of nearly 2,05,000 turtles were reported to have nested on this beach.

Unfortunately, turtle lovers have little to cheer about as very few eggs are expected to hatch. "The turtles are cramped for space -- a strip of less than 50-70 metres is available to them. The narrow beach has forced the turtles to nest by digging up eggs laid earlier. This has resulted in the loss of several turtle eggs," points out Biswajit Mohanty, project co-ordinator of Operation Katchhapa, a non-governmental project to save turtles.

A significant number of turtles nested at Pentha beach in the Gahirmatha Marine Sanctuary over a period of three days beginning March 5. Mass nesting of turtles has still not taken place in Nasi Islands in Gahirmatha, a site famous the world over for this rare natural phenomenon.

There are three mass nesting sites in Orissa: Nasi Islands in Gahirmatha, and the Devi and Rushikulya river mouths. Significantly, even in the previous season, the turtles did not turn up in the expected numbers.

On an average, an Olive Ridley turtle lays about 120 to 150 eggs from which hatchlings emerge after a period of 45 to 50 days. However, these eggs are always under threat from natural predators such as dogs, jackals, wild boar, hyenas, crows, eagles and gulls. Another danger is that of the eggs being washed away due to soil erosion. Studies show that only one egg out of every 1,000 laid hatches and survives to become an adult Olive Ridley sea turtle.