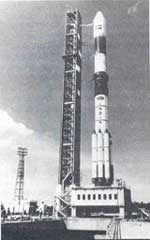 ON OCTOBER 15 this year, India finally joined the power pantheon in outer space: the successful launch of the Polar Satellite Launch Vehicle (PSLV-D2) from Sriharikota on India's eastern coast placed in a polar sun-synchronous orbit a 870-kg remote sensing satellite, the IRS-P2. According to K Kasturirangan, chairperson of the Indian Space Research Organisation (ISRO), "The PSLV is the most complex technological project ISRO has attempted so far."

According to Pramod Kale of the Vikram Sarabhai Space Centre, Thiruvananthapuram, India has now hypothetically joined the 6-member nation club of plus-1-tonne satellite launchers. "ISRO will be upgrading the carrying capacity in the PSLV-D3 to 900 kg, and then to 1,200-1,350 kg," he says.

Hitherto, India's remote sensing satellites, which were the backbone of the natural resource monitoring programme, had piggybacked into space on Russian launch vehicles. India's first effort at hoisting a developmental launch vehicle PSLV-D1 on September 20, 1993 had ended in failure. Notwithstanding the fact that it had plopped into the Bay of Bengal merely 5 minutes after launch, former ISRO chairperson U R Rao had called it "a 98 per cent success".

The PSLV programme was begun in 1982 as a joint effort by several agencies in ISRO. This year (1994-95), ISRO has allocated Rs 381.8 crore to launch vehicle development -- more than half its budgetary allocation. The next vehicle in the series PSLV-D3 is scheduled to be launched in 1995-96 followed by at least 3 similar PSLV missions by decade-end. The first Geostationary Satellite Launch Vehicle (GSLV), weighing perhaps 2.5 tonnes, is due to be launched in 1996-97 at an orbit of about 36,000 km.

The satellite IRS-P2 moves from the southern to the northern hemisphere in an east-west direction, but because of the earth's equatorial bulge, its orbital plane is always at the same angle to the sun-earth line, ensuring that it always passes over the same point at the same local mean solar time, and thus enables visual comparison on different days.

The National Remote Sensing Agency, Hyderabad, which receives and analyses the data from IRS-P2, reports that the satellite has been beaming down high quality imageries, including those of Assam and Meghalaya, clearly displaying towns, forests, rivers and lakes. The satellite also sent pictures of newly formed islands in the Bay of Bengal off the coast of Bangladesh, indicating lush mangroves on the landmass and deposits of sediments in the mouth of the Meghna river.