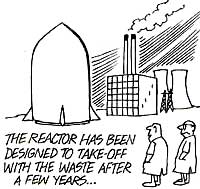 Oleg Chembrovsky of the Tsiolkovsky Russian Space Academy and Albert Gafarov of the Research Institute for Thermal Processes say their method would be able to dispose of 10 tonnes of radioactive waste a year by 2003 and would cost approximately L10 billion a year. The cost could be offset by a 10 per cent rise in the price of nuclear electricity.