Was the Supreme Court correct in saying that the former Union minister of environment and forests had betrayed public trust? 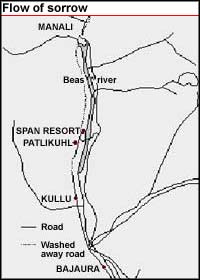 on december 13, 1996, the Supreme Court (sc) cancelled the deed of 2.22 ha of forest land leased out to the Span Motels Pvt Ltd (smpl) in Himachal Pradesh. They directed the latter to restore the damage caused to the environment. The sc ordered the hearing on the cost of the damage to be held on February 5, 1997.

The controversy arose with press reports in February 1996 accusing smpl of turning the Beas' course by creating a channel and diverting the river to at least one km downstream. While the 'resulting' floods that ravaged the countryside in 1995 have long since subsided, the debate still rages on.

Between September 2-5, 1995, 74 cm of rainfall occurred in the area, compared to the annual average of 81 cm recorded during 1990-93. In the ensuing deluge, stretches of the highway, and several structures were completely washed away. Total loss was estimated at Rs 96 crore. Even today, the entire Beas riverbed, from Manali till Bajaura, looks ravaged. The smpl-owned Span Resorts, immediately upstream of Patlikuhl town, was also affected by the floods. Interestingly, the major shareholders of this firm are of the former minister of environment and forests (mef) Kamal Nath's kin. Press reports indicated that the company had initially encroached this forest land, which was regularised during Nath's tenure as minister, implying procedural irregularities. This 2.22 ha land lay immediately upstream of Span resorts.

The debate was whether the smpl had indeed diverted the river or not and whether its 'interference' with the river regime had indeed caused damage to the area. "The works executed (by the smpl) in 1993 were bank protection works, not so as to change the regime or course of the river. A medium flood occurred... in 1994. Partly due to the protection works, no appreciable damage occurred during this flood. The main current still continues on the left bank," a report by the Central pollution control board (cpcb) noted after inspecting the site in June 1996, under the sc's direction. The report added, "The dredging and channelisation of the left bank channel should normally keep high intensity of flow away from both banks in moderate flood. This should, thus, not be a cause for concern."

A National Environment Engineering Research Institute (neeri) team also inspected the site in December 1996. neeri did not specify as to how the smpl's activities harmed the environment. "After the 1995 flood, the smpl has channelised the Beas by dredging the left side channel to increase its capacity and constructed wire crate (boulders held together by wire) revetments on both banks to direct the flow through this channel," noted the neeri study.

During a field visit this January, Down To Earth (dte) observed that smpl had dredged and tried to define Beas' main channel. But, there was no evidence of any new channel being created as indicated by press reports, or the river having been diverted. Wire crates had certainly been put together on both banks to define the river's course.

dte observed similar constructions upstream of Patlikuhl town by the local municipality. The smpl had constructed one such wire crate across the mouth of a spill-channel where a part of the Beas flowed prior to the 1995 floods. The spill-channel rejoined the Beas while flowing past the smpl. This, however, did not prevent seepage even in January -- a low-flow season. "At present, this spill-channel has some trace of water and is blocked at its upstream by wire crate revetments," notes the neeri report. "This should indicate that when there is adequate water in the river, the spill-channel serves as a channel of the river," says Sanjay Mukherji, senior executive, smpl.

smpl officials state that the chief conservator of forests (ccf) allowed the construction work and that neither the cpcb nor neeri pinpointed the motel to be environmentally detrimental. The ccf's letter says since the cost of bank protection was high, "the smpl should undertake this work by spending amounts as much as necessary to protect their earlier leased land and property over it" because the forest land "itself may suffer badly due to floods and may be washed away in the long run, as it happened during 1993".

Material available with dte confirms that smpl had indeed encroached the 2.22-ha forest land and regularised it during Nath's tenure. smpl had used this land for landscaping, by planting trees. However, this happened after approval by mef's forests advisory committee (fac). "All due procedures were followed when this land was regularised," asserts J N P Nishad, minister, mef. While regularisations are usually settled by the fac, to keep all transactions of regularisation above board, this case was sent -- at Nath's insistence -- also to the cabinet secretary, who conveyed his go-ahead to the mef.