Diamonds not only have glamour value; research reveals that they have helped solve a long-standing puzzle on recycling capabilities of the earth's crust 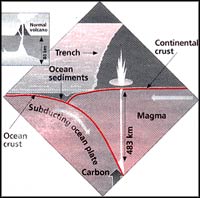 THAT the earth's crust wasb~ing recycled was a suspicion held for long by earth scientists. They believed that the crust which disappeared below the subduc- tion zone, went into the molten rock layer -the mantle. This later reap- pearedtotally altered after undergoing changes due to high temperature and pressure conditions. Though the hypothesis made sense, scientists had no way of proving it, that is till recently (Nature, Vo1379, No6561).

Led by Leon R M Daniels, a team of scientists from the University of Cape Town in South Africa and their col- leagues from the University of Edinburgh in Scotland, believe they have unraveled the mystery with the help of a flawed diamond. The diamond sWdied by the team contained the min - eral staurolitewhich is typically found in metamorphosed clay-rich sediments. They argue that since stauroliteis essen - tially found within depths of eight- 40 km, its presence in diamonds which form about 120 km inside the earth's mantle is substantial proof that material from the continental crust is recycled into the mantle. Once encapsulated, these staurolite.minerals are preserved in their pure form, isolated from outside influence. This helps scientists to draw conclusions on the characteristics of the earth's interior. Staurolite is formed due to changes brought about by the effects of moderate temperature and pressure on aluminium-rich sediments deposited by rivers. The mineral inclusions stud- ied by Daniels' team is similar to those found in the metamorphosed sedi. ments, suggesting that the staurolite crystal was formed in the crustal zone and then later carried down into the mantle through subduction.

Normally, under high pressure, staurolite from the metamorphic rock is replacedbya combination of kyanite and garnet. How could it then survive to be incofporated into a diamond? Specu- lating on this paradox, Daniels et al sug- gest that the staurolite could have formed in a quartz deficient enviroQ- ment which prevented its transforma- tion. Alternatively, it could have formed within another mineral such as garnet and was thus protected from further reaction till it was encompassed by a diamond. The diamond with the stauro- lite inclusion also has a heavy carbon-13 isotope ratio indicating its mantle origin.

Finding a crystal of crustal origin in a diamond is, perhaps, the most conclu- sive proof of recycling of the earth's crust. As William MWhite, a geol'hysi- cist at Cornell University, Ithaca, us, said, "This is probably the best piece of tangible physical evidence of something that you can actually lay your hands on for the reality of deep recycling."

But there are many questions which do not have an answer yet. Doubts exist over the mineral survival in the deep. Few scientists wonder at the significance of the recycling process: does it help to maintain a constant continental mass; does it produce the chemical hetero- geneity observed in the mantle, and if it does, to what extent? OQly "further studies of diamonds, those with almost indestructible capsules carryingminer- alogical and chemical clues from the earth's deep interior, may help provide answers," concludes White.