Species, but not quite

Viruses, which display an easier capacity for mutation, could be nature's 'quasi-species' 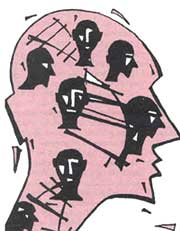 SPECIES are to biology what electrons and protons are to physics or what mole- cules are to chemistry. A species is a set of individuals of the same kind, It is the Darwinian process of natural selection that moulds a species. Since natural selection is a mechanism for weeding out deviants -genetic mutations - members of a species bear a significant degree of resemblance to each other.

Deviations do occur, but most organisms are such complex creatures that successful mutations are extremely rare; the genes of these organisms have been fine-tuned to enable them to per- form a large number of highly skilled tasks. Therefore, any tinkering with the genetic material is more liable to harm than help.

Several years ago, the physical chemist Manfred Eigen pointed out that the above line of reasoning might not hold in the case of very elementary life- forms. For instance, an entity which can reproduce, but do almost nothing else, would be more tolerant of mutations than a higher animal or plant. In such a case, even if there was a unique entity to begin with, one could end up with a cloud of variants. This cloud would con - sist of copies of the original entity and those of all the mutants that arose from it. Eigen coined the term 'quasi-spec;ies' to describe such a cloud. In effect, a quasi-species is like a family whose members are all related to one another, but only very tenuously.

Eigen also pointed out that there were candidates to fit into the quasi- species category -viruses such as those that cause polio, rabies and AIDS, which have RNA {ribonucleic acid) as their genetic material instead of the more familiar DNA { deoxyribonucleic acid). These viruses are small in terms of their genomes or hereditary material. Their RNA consists of only about 10,000 units {human DNA is made up of about 3,000 million units). Also, the viral RNA does little else other than carrying infor- mation for copying itself and for making a coat to move from one host to another. The support structure required for the infection is borrowed from the infected host. .The copying of viral RNA is a low-fidelity process with a mutation rate that can be a million-fold greater than in higher organisms.

Extensive experimental work, much of it done in the laboratory of John Holland in the University of California at San Diego, us, offers strong support to Eigen's hypothesis; some years ago, tests had shown that rapid multiplica- tion and mutation of the virus in hepati- tis c patients ensured that at any given time, the viral population in the patient's body consisted of a quasi-species. Almost 30 per cent of the circulating virus particles were different from theType that was originally responsible for the infection.

A more recent report (Proceedings of the us National Academy of Sciences, Vol 92, 1995) points out that RNA viruses can exhibit enormous adaptability. In a series of experiments in which viral populations were transferred frequently to a new host, variants that could repro- duce themselves 50 times faster than the starting strain, were isolated. To under- stand what this implies, imagine a com- parable outcome in humans: reproduc- tive maturity being attained at the age of six months!

Our understanding of quasi-speties is still at a very nascent stage. Even so, there are already important clinical implications of the existing knowledge. For one, the variational flexibility of viruses means that it is easy for them to evade vaccines or other chemical agents that are directed against the original infection. Also, vaccines are prepared sometimes by using live viruses that have been attenuated or disabled, so that they can grow in the host but not cause an infection. The argument is that many of the antibodies generated against the attenuated virus will also work against the real thing. But there is a risk here. With each additional passage of the virus after a seed stock has been raised, appearance of more robust and virulent variants remains a possibility.