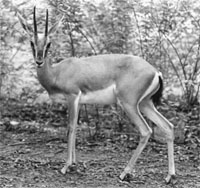 india has the dubious distinction of being in the top 10 countries where there is maximum loss in species. According to a latest report of the Worldwatch Institute, twenty four per cent of India's 316 mammals species are threatened and six per cent of its 1,219 bird species face extinction.

"Losing Strands in the Web of Life: Vertebrate Declines and the Conservation of Biological Diversity", as it is called, says: "When the percentage of threatened birds and mammals are calculated, nations in a large Asia-Pacific triangle bounded by India, Japan and New Zealand appear in danger of losing proportionately more species sooner than any other part of the planet." India ranks fifth among the top 10 in mammal species loss and seventh in bird species loss, estimates the report.

Lack of commitment to protect these species by the governments is cited as one of the reasons for this steady decline. The report says that the Melghat Tiger Reserve was "reduced by politicians" by one-third in size to accommodate timber harvesting and dam construction. More than 40 per cent of the Narayan Sarovar Sanctuary was turned over by the Gujarat Assembly in 1995 to mining companies eager to harvest the coal bauxite and limestone deposits.

The report says that "the Narayan Sarovar was home to a rich assembly of wildlife, including wolves, desert cats and the largest known population of the Indian gazelle." Successful efforts to preserve biologically diverse areas rests with the people living in them. Globally, the unprecedented expansion of humanity and its material demands are at the root of the accelerating loss of vertebrate species. According to Worldwatch, "we must come to terms with population growth, inequitable social systems, and short-sighted economic practices if we are to restore the ecological health of our planet."

In Southeast Asia, the high demand for animals parts in traditional medicine was driving the over exploitation of species, specially the tiger. "With the bones, hide and other body parts of a single tiger potentially worth as much as us $5 million, illegal hunting sky-rocketed, particularly in the tiger's stronghold, India," notes the report.

Among the major mammalian groups that are endangered in India are the lemur, monkeys and apes. Also, under severe pressure are hoofed mammals such as the deer, antelope, horses, rhinos, camels and pigs.