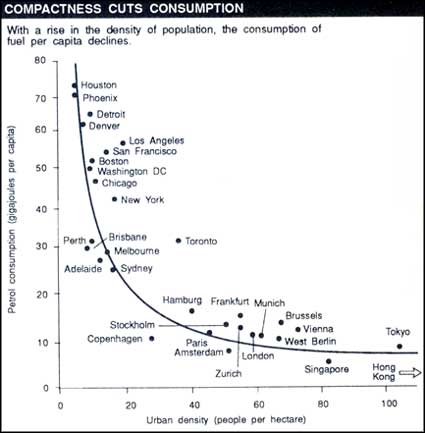 "TELL ME what form of transport you'll use and I'll tell you what your city will look like." This statement by an eminent urban planner sums up the deep relationship between transport modes and urban forms.

Traditional cities, particularly in Asia, made multiple use of urban spaces and were planned to enable walking. Only the privileged used animal-drawn vehicles. The compactness of these cities -- Chandni Chowk in Old Delhi, for instance -- meant low energy consumption and minimal environmental impact.

But the birth of the motor car changed all that, especially in countries like USA, Canada and Australia, where suburbia grew, services and supermarkets expanded on the urban fringe and cities spread their tentacles like giant octopuses. But in these days of environmental concern, these cities are ecological monsters because the fuel they consume goes up in the atmosphere and destabilises the earth's climatic system.

Data show inhabitants of Zurich consume five times less petrol per capita than those in Houston in Texas, even though they are more affluent, because they live in a more compact city and so, they use more public transport, which produces half as much carbon dioxide per capita as a car.

Mick Hamer of New Scientist writes, "Changing the pattern of urban development could reduce the output of carbon dioxide from traffic (in Organisation for Economic Cooperation and Development countries) by about 16 per cent over 20 years." This is important because transport accounts for 30 per cent of carbon dioxide output in the OECD (read rich) countries. And, worse, road transport is increasing rapidly. Officials in Britain predict that between 1992 and 2025, traffic will increase by 142 per cent. Carbon dioxide from Britain's vehicles could double by 2025, even if the average fuel efficiency of cars improves by one-third.