The use of heavy tractors leads to reduced crop production 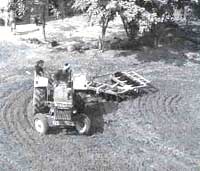 THE use of heavy tractors can damage the soil and thereby reduce crop yield by 80 per cent, say German scientists. The findings show that ploughing can also damage the soil. Rainer Horn and his colleagues of Kiel University, Germany, have calculated that the average weight of tractors and other agricultural machinery used in the western countries has tripled in the last 28 years.

Horn and his colleagues found that after six passes with a tractor exerting a force of five tonnes at each wheel, the density of small invertebrates such as worms and arachnids, which contribute to soil fertility, fell by more than 80 per cent. The impact could be noticed at depths of about one metre. Following this, the production of crops went down by nearly 80 per cent.

The researchers say that ploughing breaks up the water-filled channels. These channels are known to give soil its springiness and mechanical strength, to a depth of 30 centimetres (cm). In this process, more of the pressure exerted by a tractor is transmitted to lower layers. Horn and his colleagues have found that these layers are not broken up by ploughing, and so become more and more compact.

They found that plants were unable to push roots into this compact subsoil and suffered more in dry weather because of this. Water cannot penetrate the subsoil, and flows on the surface, thereby increasing erosion. The damage to the subsoil could be reduced by about a third by replacing ploughing with a system known as low tillage, in which the soil is broken up to a depth of only eight cm.

The researchers say that farmers have been using high amounts of fertiliser to compensate for the effects of soil compaction. Some wheat fields have even lost 20 per cent of their yields from compaction, while soil compaction caused heavy damage to about 30 million hectares of soil in Europe.