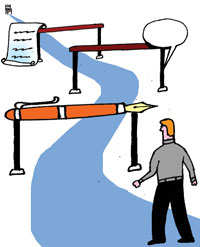 Kazakhstan’s election commission believes that candidates for the presidential election, scheduled for April, need to brush up their knowledge of the Kazakh language.

The commission’s head Quandyq Turghanqulov said the mandatory Kazakh language test for the candidates would be made stricter.

Kazakh opposition parties say they don’t have time to prepare for the polls and the new test will put them in a more disadvantageous position against current president Nursultan Nazarbayev, who is seeking re-election.