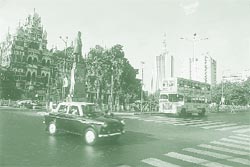 air pollution levels in Mumbai is a cause of concern if the latest statistics are anything to go by. The city has the second-highest level of pollution in the country with residents inhaling almost 660 tonnes of pollutants each day. 60 per cent of this, results from vehicular pollution. The main culprits are taxis fitted with second-hand Japanese engines.

The whole problem can be traced to the bylanes of Chor Bazar. Around five years ago, taxi drivers worked out the economics of their trade. Since, diesel was cheaper than petrol, drivers wanted to go for the diesel version. A second-hand Daihatsu or Mazda engine suited their needs. These engines cost between Rs 25,000 and Rs 40,000. In comparison, a new diesel taxi would cost around Rs 3 lakh. The natural choice was the first option. Says one of the spare parts' dealers, "If these engines are fitted into compatible cars, they perform well. Small roadside mechanics fit these engines into taxis, resulting in additional pollution."