Thousands of Mizoram farmers now face an impending financial crisis, thanks to the apathy of the state government 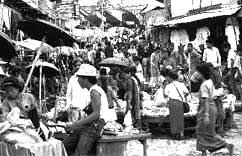 The result is that the farmers who made huge investments for ginger cultivation are on the verge of a financial crisis. "For the poor farmers the government's promise was a respite; but now it has become an additional burden as quintals of ginger lies unsold," says Lal Lungmuana, the new member of Parliament who admits to have made it an election issue in the last general elections. However, the resident commissioner of Mizoram in Delhi says that the government continues to procure ginger from farmers. In fact, according to him, the government has spent Rs 4 crore in purchasing the crop. In 1997, the Mizoram Agricultural Cooperation also purchased ginger, but the farmers later accused it of paying them much less than the market prices.

The absence of a market and bad transportation facilities have always been a problem for the farmers for selling their produce. The government's offer indicated a possible way out. But now, the issue has taken political undertones and is being regarded as the reason for the Congress party's defeat in the parliamentary election. As the situation worsened, the Widows Association of Mizoram, a social organisation, stepped in to sell the ginger stocks with the help of the Tribal Cooperative Marketing Development Federation of India, a Union welfare ministry organisation.

"I have talked with the Baharatiya Janata Party leaders for help and they have assured us of their support," says Lal Lungmuana. But the farmers continue to live in uncertainty as they cannot cultivate further cultivation without selling the existing stock.