Melghat reserve has the highest concentration of giant wood spider 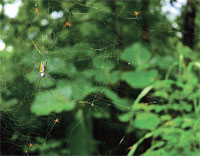 THE Melghat Tiger Reserve in Amravati district of Maharashtra now has the largest concentration of giant wood spider, nephila pilipes, in the world. This population grew because of prolonged monsoon and a longer ban on grazing due to wet weather this year. Known for its rich forests, diverse fauna and high tiger population, the reserve has around 860 varieties of spiders.

“The numbers are estimated to be 0.1 million in an area of 265 sq km,” said Ganesh Vankhede, head of Zoology Department, Sant Gadge Baba Amravati University, who also heads the Indian Society of Arachnology. He noted that though the giant wood spider are found everywhere in India, the population is phenomenal in the sample areas studied by his team.

“Usually, we find two-three males on one web, but this year there are seven-eight males per web, a truly extraordinary number,” he added. Matjaz Kuntner, international nephila expert and chair of Institute of Biology, Scientific Research Centre, Slovanian Academy of Sciences and Arts, said he has never seen such a high concentration of the spider anywhere in the world. 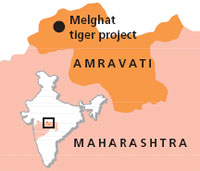 One reason for this sudden spurt in population, experts think is prolonged monsoon. “Due to the rains, the grass in the reserve, which usually starts withering around October, is still green, and this has helped the numbers of grasshoppers, nephila’s most important prey, to go up,” Vankhede said. The second reason he noted is ban on cattle grazing inside the reserve stretched two months longer than usual due to rains. Higher spider population is good for forests. “The spiders are an important part of the forest ecosystem as they have varied preybase and check pests,” Vankhede said.

Various measures are being undertaken for conservation of the spider species. “The most important are prevention of forest fires for which Melghat is notorious, and ban on cattle grazing and tourism during the crucial egg-laying period of December to February,” Vankhede said.