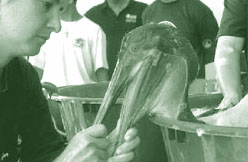 at least nine animals died and many sea lions, giant tortoises, colourful blue-footed boobie birds and other pelicans were affected due to an oilspill near Galapagos, an archipelago straddling the equator 1,000 km west of Ecuador.

The accident happened when a vessel, Jessica, ran aground after hitting rocks on January 16, 2001, on an embankment near Galapagos' capital and principal port, Puerto Baquerizo Moreno, on San Cristobal Island. The spill started on January 19, 2001 when a pipe burst in the machine room of the boat, leaking a large part of its 908,496 litres fuel cargo into the pristine waters.

"The animals that died are all marine birds, with the exception of a stingray," said Eliecer Cruz, director of the Galapagos National Park. Environmentalists around the world had feared mass death of birds and sea lions. Fortunately, strong currents carried most of the fuel into the ocean averting an environmental disaster.

But some environmentalists fear long-term environmental damage to the islands. One far-reaching threat, they fear, is that a sunken fuel could have destroyed algae, vital to the foodchain. This could threaten marine iguanas, sharks, birds that feed off fish and other species.

"The worst has already passed. Effects will be felt locally, but it is not going to destroy any species," said Gunther Reck, an ecology professor at Ecuador's San Francisco University. "The water of Galapagos are washed by a major current system, so contaminated water is not a big issue," said Mary Wilcox Silver, ocean scientist at the University of California at Santa Cruz.

"The Pacific Ocean waves would erode Jessica out of view within two years," said Ed Stanton, a coast guard from Ecuador. As the oil and chemical dispersants have nearly all been washed out to sea -- there was only a thin sheen of oil around the boat -- so the ecological urgency to move it was gone, added Stanton. The World Wide Fund for Nature (wwf) wants restrictions to be imposed on shipping off Ecuador's Galapagos Islands. "Such measures would help to ensure a much higher level of protection for this unique area of the world," said Sian Pullen, wwf 's shipping specialist.

The clean-up efforts now focus on capturing sea lions and birds affected by the spill. Cruz believes that the island's ecosystem would make a full recovery within three to four years.
The vessel's captain, Tarquino Arevalo, said that he misjudged his entry into the prophetically named Shipwreck Bay outside the tiny harbour of San Cristobal Island and this caused the accident. Arevalo will face charges of damaging the environment, considered a crime in Galapagos. He could face up to five years in jail, if convicted. But local fisherfolk feel that the government and Acotramar, the company that owns Jessica, must share the blame. The Ecuadorian navy was forced to abandon its efforts to move the vessel because they did not have the right equipment. The cleaning up process is estimated to cost us $500,000 to the economically-battered Ecuadorian government.

Galapagos became famous ever since Charles Darwin visited the islands in 1835. He speculated on the variation of the archipelago's animals and went on to develop his Origin of Species theory.