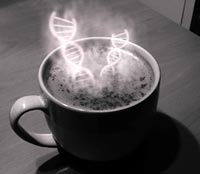 scientists in Brazil have decoded the complete genome of coffee, throwing open the possibilities to improve the quality and productivity of the popular tropical bean. Brazil accounts for one-third of the world's coffee production.

The genome was sequenced during a two-year-long project jointly carried out by Brazil's agricultural research agency Embrapa and the Sao Paulo Research Assistance Foundation at a cost of us $1.98 million. The scientists found that the genome carries information on some 200,000 dna sequences of about 35,000 genes.

According to Brazilian agriculture minister Roberto Rodrigues, the genome mapping will lead to the country developing better coffee varieties, which are pest-resistant and drought-tolerant. Moreover, in the wake of low prices resulting from overproduction, Brazil will exploit the genome to cut the cost of production along with raising the quality of beans.

The better varieties could double coffee production per hectare from 15 sacks to 30 sacks. This would allow Brazil to cut production cost by 20 per cent and raise national production to 60 million sacks without the expansion of its current growing area. Researchers also see cost savings in input costs. Currently Brazilian producers use 30,000 tonnes of chemical herbicides and pesticides that cause serious pollution problems.

Another possibility scientists will be looking at is increasing the productive life of coffee trees from the current 15 years to 30 years.

Initially, the genome database will be available only to Brazilian public institutions that have been allowed to use the findings to enhance national coffee production. According to Embrapa chief Clayton Campanhola, in about five to six years the database will be made available to the private sector, and possibly to foreign companies on payment of royalties.