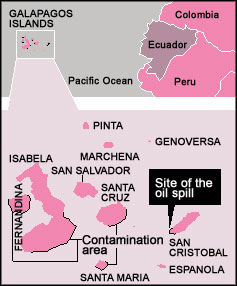 oil spills could mean far worse for the environment than they have been blamed for till date, shows a recent study conducted in the Galapagos Islands located off the coast of Ecuador. In January 2001 the tanker Jessica, belonging to Petrocomercial, an arm of the Ecuadorian state oil company, had run aground, dunking 150,000 gallons of oil into the ocean around the island of San Cristbal. At that time it was suggested that the damage had been limited thanks to shifting winds that had kept the spilled oil away from the main island.

But the study, conducted by Martin Wikelski, a professor at the us-based Princeton University, has shown that a small part of the spill's residual had subtly caused ecological devastation -- it had killed nearly 60 per cent of the island's iguanas. About 15,000 of the 25,000 Amblyrhynchus cristatus iguanas of the island had starved to death because of the spill.

The specific species of iguanas digest seaweed that they take in from the water. The oil spill, shows the research, killed the bacteria that helps the iguanas digest the seaweed. As a consequence of this only about 10,000 of them had survived starvation.

Judith E McDowell, zoologist at the Woods Hole Oceanographic Institution, usa, told the media that the Galapagos findings, though still lacking specific evidence of the toxic effects, are compelling proof. "The circumstantial evidence would certainly suggest that oil exposure was a critical factor in the iguana mass killing," he said. McDowell is the author of another recent paper that has revealed hitherto unknown long-term ill effects of oil spills.

Wikelski had been studying the iguanas for effects of El Nio on their ecology when the spill occurred. He is now seeking us $600,000 in damages as part of a wider us $14 million claim being made by Galapagos National Park against the master, owners and insurers of Jessica. He says his studies of marine iguanas in the Galapagos Islands were damaged due to the spill.