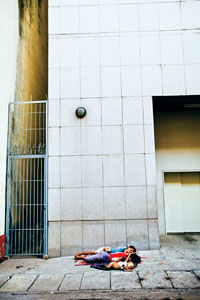 In Bangkok where dizzying neon signboards and glass-clad skyscrapers have been overshadowed only by a grim political battle, a group of young photographers is hoping its work behind the lens can bring human rights back into focus.

On exhibit till mid- December are 27 stunning images by six Thai photographers.

Called the ‘Human Rights/Human Wrongs’ exhibit, it is organised by the Friedrich Naumann Foundation in collaboration with the Goethe-Institute, Thailand. One of the photographers Arthit Tangtatsawad travelled across Thailand to capture images, which reflect his concern over rising inequalities within a country often seen as a model by its neighbours.

Tangtatsawad said while parts of Thailand have been inundated by floods over the past few months, residents in Bangkok, which has benefited from anti-flooding measures, have not been doing enough to help their fellow Thais.