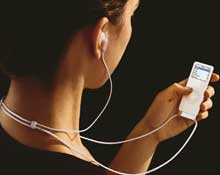 With Apple Computer's iPod digital music player selling like hot cakes, and the tiny iPod nano set to be one of the must-have gifts this Christmas, physicians are now warning that first cases of a condition they term, "iPod finger" have begun to emerge. "Handheld music machines are extremely popular and users are constantly using small, difficult buttons with the same finger in a repetitive motion," said Carl Irwin of the British Chiropractic Association. "The nature of modern technology means that these devices will only get smaller, and I would not be surprised if hand and finger related injuries become one of the most common repetitive strain injuries that chiropractors treat," he added.

According to the uk daily, The Guardian, anecdotal evidence from general medical practitioners shows that iPod finger is similar to the pain sometimes caused by excessive text messaging on mobile phones.