Orissa turning into a haven for the hazardous industry 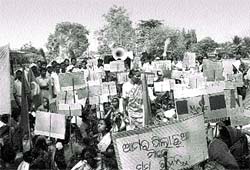 SPONGE iron units seem to be mushrooming in Orissa like never before. The status as on September 16, 2003: around 22 proposals pending with the Orissa Pollution Control Board (OPCB), and 26 plants already functioning. The industry-starved state views the boom as economic convalescence, but is turning a blind eye to the unbridled pollution caused by these industries.

Most of the units have sprung up in tribal districts such as Keonjhar, Sundergarh, Mayurbhanj and Jajpur. These areas have rich reserves of iron ore and coal - the raw materials for sponge iron. Sick and tired of the smoke-belching industries and an insouciant state administration, the local people have taken to the streets. The origin of their movement can be traced back to December 10, 2001, when tribal women of Sukruli block under Mayurbhanj district 'gifted' samples of contaminated water and toxic soil to Orissa Chief Minister Navin Patnaik (see Down To Earth, Vol 10, No 20, March 15, 2002).

Subsequently the Orissa High Court (HC) directed Shiv Shakti Sponge Iron Limited (SSSIL) - whose unit is located in Sukruli - to install an effective pollution prevention mechanism. Though most of these industries carry out activities which are highly polluting, only two have been served closure notices.

Right from the time when the state government's 'Industrial Policy Resolution-1996' declared the sponge iron industry a thrust area, there has been a flood of proposals for establishing small-sized plants. Such ventures involve an investment of Rs 6 crore to Rs 8 crore. Prior to 1996, there were only two major companies in the state - Orissa Sponge Iron Limited (OSIL) and Tata Sponge Iron Limited - and both had a high production capacity.

It is a long-established fact that sponge iron units emit carbon monoxide, sulphur and nitrogen oxide. Sagar Dhara of Hyderabad-based environmental consultancy group Cerana Foundation divulges more distressing data: "The average annual ground-level suspended particulate matter concentration around the SSSIL plant translates into an average lifetime cancer risk of 15-25 people per million for those living in a 10-kilometre radius of the unit."

Notwithstanding such findings, OPCB failed to specify any pollution-controlling device till as recently as three months back. Although small plants installed bag filters and wet scrubbers to keep dust levels in check, the instruments were ineffective. Saroj Patnaik of OSIL points out: "Only electrostatic precipitators (ESP) can effectively prevent emission of toxic gases from kilns." A K Swar, chief environment engineer, OPCB, concurs: "An ESP can control up to 95 per cent of dust emission." The reason why many manufacturers are averse to installing this device is its cost of around Rs 1.5 crore.

Almost as an afterthought, OPCB has set a December 31, 2003, deadline for all sponge iron units to install ESPs. Individual plants have been given such ultimatums in the past, but to no avail. With another 40 mini units likely to set up shop in Orissa over the next two years, the tribals' problems are sure to be compounded.