Spotlight on HFCs on day-one of Montreal Protocol meet 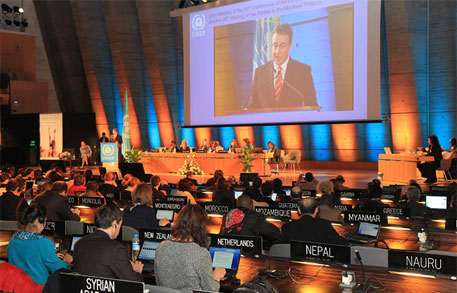 The first day of the 26th Meeting of Parties to the Montreal Protocol in Paris was marked with hope offered by India on the debate on hydrofluorocarbons (HFCs).

The Montreal Protocol regulates substances that deplete the ozone layer. These include aerosols, refrigerants and solvents. HFCs pose no harm to ozone and were, therefore, proposed as substitutes for ozone-depleting gases like chlorofluorocarbons (CFCs) and hydrochlorofluorocarbons (HCFCs). But then HFCs are harmful in another way—they are super greenhouse gases that cause global warming several hundred times more than carbon dioxide; in climate parlance they have high global warming potential (GWP). As the demand for refrigeration and cooling rises, the urgency to regulate these super green house gases is also growing.

This is in line with Modi-Obama talks last month. Interestingly, last year the same Indian delegation had opposed the formation of contact group despite similar agreement between Singh and Obama at the G20 meet.

French Environment Minister Ségolène Royal and Achim Steiner, UN Under-Secretary-General and UNEP Executive, in their opening statements at the meeting showed sensitivity to developing countries by gently nudging the countries for HFC phase down without directly referring to it. They, instead, spoke of transition to low global warming potential (GWP) alternatives to be included in the ongoing transition away from HCFCs.

The first day set the ball rolling for the entire week by putting forth the agenda. Two amendments on HFCs proposed by North America-Canada-Mexico and Federated States of Micronesia have been debated ad nauseum in this forum since 2009. Saudi Arabia, which in the past has been vehemently opposed to discussing HFCs, took a non-partisan approach and said that while they do not agree with the amendment they would be open to discuss HFCs. Countries like Kuwait, Egypt, Bahrain, Iraq, Jordan and Tunisia, however, opposed the formation of “contact group” (UN term for discussion group) on HFCs. However, they had failed to listen to the carefully worded statement by Saudi Arabia and were quick to draw the conclusion that Saudi Arabia had opposed the formation of a contact group.

However, United States, Nigeria and the EU intervened and insisted that the momentum from July HFCs workshop in Paris that focused on management of HFCs must be used.

Given that there is rapid development in low-GWP alternatives, and the fact that the proposals were submitted within the time frame using due procedure prescribed in the Montreal Protocol to include an amendment, HFCs deserve to be on the agenda. The chairs ruled that these items shall be retained in the agenda.