How does a dead spot in a tennis racket help in the most powerful of serves? 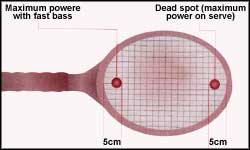 if you want to become a better tennis player these tips would certainly prove handful. Now Rod Cross, a physicist at the University of Sydney, Australia, has found that it is not a bouncy spot but a dead spot on the racket from where the powerful serves come from ( New Scientist , Vol 155, No 2098).

When Cross measured the bounce at the spot that seems to power the serves most, he found that the ball did not bounce. He clamped the handles of the racket to a bench top, leaving the other end free to vibrate. He then fitted the strings and frame of the racket with devices to measure the ball's impact and the racket's movement.

By dropping a ball from a height of 50 cm above the racket, the scientist collected data about the bounce of the ball. He observed that the ball bounced most when it hit a spot above five cm near the handle end. Whereas it bounced less when the ball was dropped at the centre of the racket. Cross found that when the ball hit the string nearly five cm from the tip, it did not bounce.

After analysing the data collected on measurements of impact force and racket vibration, he reached the conclusion that the energy of the ball is transferred entirely to the racket after hitting the dead spot. The phenomenon is similar to one when a billiard ball stops after striking an another.

According to Cross, the energy transfer works both ways. When a moving racket hits a ball in rest, the whole energy coming out of the swing is transferred to the ball. This is the reason that a serve is most powerful when it comes out from the tip of the racket.

However, Cross says that the dead spot is not effective while a player has to play a return shot. Because at that time, the ball is in motion and energy of the ball is absorbed by the racket. For playing a ground stoke, he says, the players should hit the ball with the bouncy part of the racket, which is near the handle end. But there is no single spot on the racket that returns the ball with significantly more energy than anywhere else, he says.