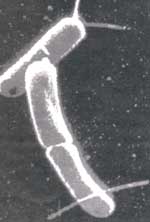 AN INVENTION at the Lawrence Berkeley National Laboratory, us, promises to mitigate the potentially deadly effects of the bacteria Eschcrichia coli. Every year, the toxic E coli kills as many as 200 people in the us alone by causing intense intestinal distress, severe dehydration and internal bleeding, and in serious cases, damage to the kidney (Scientific American, Vol 276, No 3).

Usually, to detect the bacteria, samples taken from food or from an afflicted patient are cultured for 24 or more hours, only after which the harmful organisms can be detected with a microscope or special dyes. Now researchers at the Lawrence laboratory's biomolecular materials programme have created a thin film that functions as a litmus test for the bacteria. The plastic strips - less than a penny per piece - instantly change from blue to red in the presence of any toxic strain of E coli. "It could change the rules of the game," asserts Jeffery Kahn, a laboratory spokesperson.

Possibly because of a less equipped immune system, young children and the elderly are particularly prone to the attacks of the virulent E coli. The most notorious outbreak of food poisoning in Scotland in December 1996, left 12 persons dead and several hundred seriously ill. In the summer of 1996, a number of school children died and many were seriously affected.

However, this may just be the tip of the iceberg. Often it happens that the victims are unaware of the malady that has afflicted them. According to the Center for Disease Control and Prevention, the most common toxic strain of E coli detected - E coli 0157:H7 - is responsible for at least 20,000 cases annually in the US. Studies claim that E coli strains may be present anywhere from 0.1 to 3.7 per cent in meat sold in the us alone.

To build the E coli detector, the Berkeley group, headed by Raymond Stevens, duplicated the internal cell-surface receptor molecule and joined it to an underlying 'backbone' which had been developed at the lab by Mark Bednarski and Deborah Charych. The backbone is a long chain of linked lipid molecules that together constitute what is known as a 'polydiacetylene film,' which is blue in colour. The binding of the E coli toxin to the other part of the molecule (the cell-surface receptor) breaks the links joining the lipids to each other, changing the colour of the film to a reddish magenta.

According to Stevens, the test film could be manufactured at a low cost and incorporated into packaging materials like wraps used for meat or the lids of jars and cans. In the meanwhile, the Berkeley group hopes to find other uses for the technology. It envisages that the films could be used effectively to detect almost any kind of harmful microbe, from the influenza virus to those that are used in biological warfare. A flu detector has already been used to detect the virus in the saliva of an infected person. Discussions are also underway with the US Army on tests to detect botulinum toxin and anthrax, two common biological agents.