Spread of GM plants out of control in many countries, says report

German-based non-profit says transgenes from species such as bentgrass, oilseed rape and cotton have already escaped permanently into the environment or wild populations 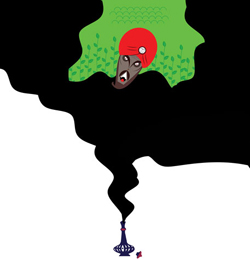 Genetically modified (GM) maize, rice, cotton, oilseed rape, bentgrass and poplar trees are spreading uncontrollably in countries such as the US, Canada, middle America, Japan, China, Australia and Europe. In many cases the plants have escaped far beyond the fields into the environment and in some regions the transgenes have already moved into population of wild relatives, according to findings released by a non-profit.

The findings are part of a report—Transgene escape-Global atlas of uncontrolled spread of genetically engineered plants—that was released in Munich, Germany. The report has been put together by Testbiotech, a non-profit founded in 2008 by a group of experts (mostly scientists) to promote independent research and public debate on impacts of biotechnology.

The report documents several case studies which show genetically engineered plants have spread uncontrolled into the environment. “In some instances in north and middle America, we can assume that transgenes from species such as bentgrass, oilseed rape and cotton have already escaped permanently into the environment or wild populations,” the report states.

In the case of GM maize (corn), rice and poplar, there is a high likelihood that this will happen in the near future. Apart from commercial cultivation and experimental field trials, there are cases showing that the uncontrolled dispersal of genetically engineered plants can be because of import of raw materials and transport of viable grains for food and feed production, the report states.

According to information, genetically engineered plants were grown on 170 million hectares globally in 2012. The plants were mostly soybean, oilseed rape, maize (corn) and cotton. Nearly all of them had two technical traits: herbicide tolerance and/or production of insecticidal proteins.

Authored by Andreas Bauer-Panskus, Sylvia Hamberger and Christoph Then, the report says there are various reasons for transgene escape. Apart from commercial cultivation and experimental field trials, losses from the import and transport of viable grains for food and feed production are a source of uncontrolled dispersal. The consequences cannot be reliably predicted, and from the cases documented in the overview it is evident that no prediction can be made on how these plants will behave in the long-term or interact with biodiversity.

“EU Commissioner Tonio Borg who is currently pushing for the authorisation of genetically engineered plants in the EU, should be aware of the consequences of this technology on a global scale,” says Christoph Then. “We need regulations to ensure that release of GE organisms is prohibited unless they can be removed from the environment if required,” he adds. The report is supported by Gregor Louisoder Umweltstiftung.