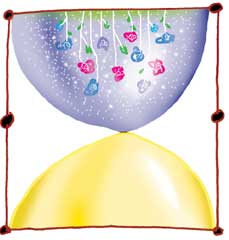 THE Rhododendron flowers were in full bloom in Uttarakhand in December. Nothing unusual about that except the timing was wrong. Uttarakhand has a large diversity of rhododendron trees and shrubs that usually bloom between February and May. But forest patches in Chamba, Mussorie, Uttarkashi and Almora districts brightened with the pink and red rhododendron or burnas flowers two months earlier.

Residents of Uttarakhand first noticed changes in flowering patterns three years ago. In 2006, early flowering was seen on a few rhododendron trees in Almora district. In November 2007 residents of Pinder Valley in Garhwal noticed the flowers. This season the phenomenon has been noticed in almost all districts. Even the litchis, peaches and apricot trees are bursting with blossoms in Ramnagar and Kumaon. "This premature flowering clearly indicates increasing atmospheric temperature," said P P Dhyani, ecologist and scientist with the G B Pant Institute of Himalayan Environment and Development in Almora. He said the increase in temperature between November and January has also resulted in wheat crops growing spikes before time. Early budding has been seen on kafal or balsamodendron, mango and apple trees and the indigenous fruit plant vibrnum or ghenu.

Dhyani said research is needed to ascertain how early flowering affects seed productivity. Senior scientist at the Institute, R K Maikhuri, agreed. "Most locally valued species have poor seed bank, and they will be threatened if seed production declines," the scientist said.