Spy in the sky 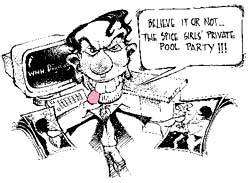 after the successful launch of Earlybird 1, the first commercial spy satellite, anyone can now acquire high resolution images taken from space for as little as us $300. It's getting popular everyday and the maker of the satellite, Earthwatch Inc, even has its own website on the Internet (www.digitaglobe.com) where these photographs can be viewed and downloaded after paying the amount.

According to Donovan Hicks, Earthwatch's president, Earlybird 1 has been designed to gather high resolution pictures that can be acquired by an approved customer through the Internet, among other ways. The prices are steep: us $2.75 to 7.25 per square km, depending on whether they are from the company's archives or taken at a customer-specified place, date and time. Colour images are also available, but these are less sharp and more expensive.

Earlybird 1 has finally ended the monopoly of the world's most advanced military and intelligence services on gathering high resolution pictures from the space. The photographs, according to Hicks, can prove crucial for town planning, topography, disaster relief, mining and giving prompt information on environmental and military crises to the media and the public.

The three-metre images obtained from Earlybird 1 are definitely an improvement over the 10-metre pictures currently collected and sold by a French firm. Earlybird 1's photographs can easily distinguish a car from a truck or "a blanket spread out on a beach" from an altitude of 473 km above the Earth's surface, the Earthwatch chief claims.

The Colorado-based firm already plans to launch Earlybird 1's more-advanced sequel, the Quickbird commercial satellite system, by 1999. us firms entered the so-called high resolution "remote sensing" field in 1994 after us president Bill Clinton bowed to industry arguments that otherwise, foreign rivals would have a free hand.

However, the administration retains the right to "switch off" these commercial sensors during war and all us companies are banned from selling these satellite pictures to clients in Cuba, Libya, North Korea, Iran, Iraq, or any other nation that the government feels is a "suspected agent of terror.