Third World countries warned at Amsterdam recently that even if more effective vaccines and drugs become available, they may not be afford them. 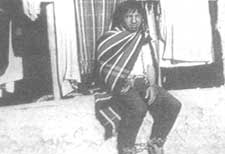 THE EIGHTH international conference on AIDS "will be sadly remembered for the change in venue from Boston to Amsterdam, necessitated by the discriminatory travel restrictions still in place in the USA". This rueful comment was made at the opening session by Michael Merson, director of WHO's global programme on AIDS, referring to the US ban on the entry of people infected by the killer virus.

Far more severe in his castigation of US health officials was Jonathan Mann, chairman of the conference and director of the International AIDS Centre at Harvard University.

"How a country tackles AIDS is not usually different from how it deals with other health problems", he commented. If the Netherlands deals in a non-discriminatory, open, forthright and humane way with the problem of AIDS, this is not surprising because it deals with a lot of social and health problems in the same way. "Thus, it is also symptomatic that the US National Commission on AIDS has identified a distinct lack of high-level leadership in dealing with this crisis."

Activists at the conference, which began July 19 and was attended also by about 1,000 scientists from 133 countries, harshly criticised USA and the manufacturers of anti-AIDS drugs. Medical costs in the treatment of AIDS can amount to US $1,000 a week, estimated Fred Hellinger of the US Agency for Health Care Policy and Research. The cost is high, he noted, mainly because the drugs used are expensive. Expensive laboratory tests also account for a substantial proportion of the costs. Medical care of an AIDS patient, including government expenditure, ranges from $38,000 annually in the USA to about US $400 per year in Africa, where the disease is currently most rampant.

However, Third World researchers representing 95 countries repeatedly warned the conference that even if vaccines or more effective drugs to treat AIDS become available, their nations may not be able to afford them. Already about half the beds in urban hospitals in Zaire and Zambia are occupied by AIDS patients and in some African cities the figure is as high as 80 per cent. Uganda is afraid that by 2002, AIDS-caused deaths will exceed total births in the nation. Not surprisingly, Uganda has agreed to test new anti-AIDS vaccines even though western countries are still hesitant to do so -- a matter of some controversy at the conference (See box: Testing sites for new vaccines).

Sounding a sombre warning, Mann pointed out, "Science alone cannot defeat AIDS. Efforts to stem the spread of the AIDS virus have failed because they have not considered wider social issues. The fundamental issues are inequity and discrimination and AIDS most affects those people who are discriminated against or are marginalised -- those who have less access to care, education, jobs, a future with dignity".

Referring to the "squeamishness about AIDS", the British medical journal, The Lancet (Vol. 340 No. 8811), stressed that for anti-AIDS action the community "must rely on an uncertain weapon -- public embarrassment of uncooperative politicians. The only other weapons in its arsenal -- fear and compassion -- may make a comeback some day, but, at present, their potency appears to be receding."

It is this lack of compassion that has jailed AIDS victims in the northeastern Indian state of Manipur, imprisoned HIV-infected prostitutes in Thailand and evicted the young inmates of a hostel for HIV-infected children in Poland.

Meanwhile, the search for a vaccine to combat HIV, the human immunodeficiency virus that causes AIDS, has brought into laboratories a variety of flora, mostly from rainforests, and fauna, notably monkeys. Research is being conducted on the hagfish, one of the world's oldest vertebrates, and the common housefly, daisy leaves and the Australian horse chestnut.

Currently, the US pharmaceutical firm, Wellcome, and its anti-viral drug, AZT, has a virtual monopoly on AIDS treatment. Glaxo, in collaboration with BioChem Pharma; Bristol-Myers Squibb; American Cynamid, and Upjohn Co, all US-based, are in advanced stages of researching and laboratory testing anti-HIV (human immunodeficiency virus) drugs, though a time frame has yet to be set for clinical testing. And, at the St Louis University School of Medicine a group is working on a vaccine that is already being clinically tested.

In Australia, a research team at the Sydney University of Technology has been looking for the answer to AIDS in the primitive immune system of the hagfish, which, though it has no spleen, lymphoids or bone marrow to counter infections, remains impervious to viral infections from its diet of dead fish. Also in Australia the horse chestnut has yielded castanospermine, a drug that "looks promising in the treatment of AIDS" because it reportedly blocks multiplication of the AIDS virus, says Emile Morgan of St Luke's Hospital in the UK. The drug is both difficult to synthesise and expensive to obtain.


Morgan is also experimenting to determine whether daisy leaves can yield an AIDS vaccine. A study of 87 herbaceous plants in the diet of sheep were tested and the Bradford scientists found a substance much like castanospermine in the daisy leaves.

Vaccine researchers are following a wide variety of approaches. British researchers have found that yeast cells have "jumping genes" which can produce virus-like particles (VLPs). These VLPs appear to be related to the HIV. British Biotechnology, an English firm, has engineered a number of VLPs which can carry a wide variety of proteins on their surface. These proteins and the antigens they produce may be helpful in producing an anti-AIDS vaccine.

Researchers at the University of Alabama, Pasteur Institute in Paris, Duke University and the National Cancer Institute both in the USA, report that they have been able to protect three chimpanzees against AIDS when they were injected with HIV-infected white blood cells. (Science, Vol. 256 No. 5064). Each of the chimps was given slightly different types of vaccine. None of the chimpanzees developed even a hint of HIV-infection. But the tests did not prove to be an unequivocal success. One year later, when one of the chimps was once again infected with the virus, it succumbed to it. Scientists are still trying to understand why they succeeded the first time and failed the second time, which shows up the fact that anti-AIDS vaccine research still has a long way to go.

Meanwhile, at St Louis University School of Medicine in the USA, the first phase of clinical trials of Immuno RGP-160 -- a vaccine -- on 60 HIV-negative volunteers is continuing and preliminary trials, including one on HIV-positive volunteers, are expected in late 1993.

Currently, because there is no cure for AIDS, health personnel worldwide emphasise the use of "barrier contraceptives", such as condoms, to check the spread of HIV. Researchers are actively pursuing the possibilities of developing similar barrier contraceptives for women. The use of such protection by women has significance in view of WHO reports that female incidence of AIDS is rising as safe sex is at present more a male-oriented initiative. "It's an enormous problem," commented Anke Erhardt of the Columbia School of Medicine in the USA. "We can't just pass out condoms. I hear it everywhere, from Africa to Asia: women just don't have the power to demand condoms." Erhardt demanded speedy development of the female condom as women constitute the single, fastest-growing patient group in the USA and one in every six AIDS cases in the USA is surprisingly a woman.