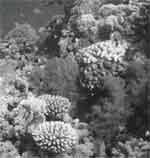 With the southwestern monsoon arriving in full force, reports from coastal towns along the 160-km stretch from Colombo to Matara indicate that sea erosion has begun taking its seasonal heavy toll on land, plantations and buildings. The worst affected areas are said to be Panadura, Beruwala, Kalamulla, Kalutara, Kasgoda, Ahungalla, Balapitiya, Akurala, Khawa and Hikkaduwa.

Periodic surveys of the affected areas had earlier revealed that largescale sand and coral mining prompted by expanding building activity in the island is a major cause of coastal erosion. This is despite the existence of the Coast Conservation Act, 1988, which prohibits mining or possession, transport and burning of limestone from the reefs. However, an official of the coast conservation department admitted that so far, the law has not been strictly enforced.

Fishing by using explosives and trammel nets have also caused extensive damage to the coral reefs. Discharge of sewage and other wastes by hotels and factories have added to the degradation of the coastal environment.