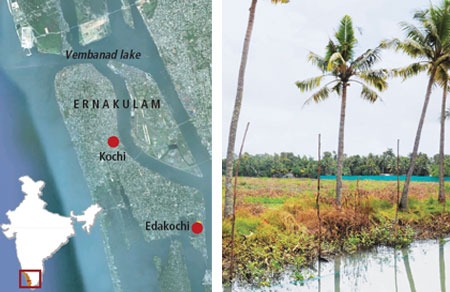 THE Kerala Cricket Association’s plan to build a stadium designed to international specifications at Edakochi has run afoul of environmental laws. The state forest department has filed a first information report in a magistrate’s court saying the cricket association (KCA) has destroyed mangrove trees in preparation for the construction work.

The stadium planned with a water front happens to be in the ecologically sensitive coastal regulation zone (CRZ). KCA, a member of the Board of Control for Cricket in India (BCCI), purchased about 10 hectares (ha) last year for its 300-crore stadium-cum-village project, 45 km from the Kochi airport.

The land purchased from a finance company is a part of the Vembanad Lake protected by the Ramsar Convention, an international treaty for conserving important wetlands. It was earlier used for pokkali farming—growing organic rice along with prawns. “The area was covered with thick mangroves,” said C M Joy, president of the non-profit Association of Environment Protection. “The whole stretch has been almost cleared of vegetation for the stadium,” he said. A preliminary investigation by the forest department found that two types of plants notified as mangrove vegetation have been destroyed at the site. This violates the amended Kerala Promotion of Tree Growth in Non-Forest Areas Act that mandates prior permission for uprooting mangroves in non-forest areas.

The project also violates the Kerala Conservation of Paddy Land and Wetland Act of 2008 which allows land filling only for public projects, that too on the recommendations of districtlevel and state-level monitoring committees and with government consent.

The district-level monitoring committee had recommended the stadium saying there is no paddy cultivation in the area for the past 15 years. “But the statelevel committee rejected KCA’s application for land filling,” said R V Varma, convener of the committee and chairman of the State Biodiversity Board. KCA is yet to seek other mandatory approvals of state agencies and the Union Ministry for Environment and Forests.

KCA refuted the charges. “There were no mangroves, only shrubs, at the site,” said T C Mathew, honorary secretary of KCA. “We will conduct a detailed environmental impact assessment,” he said.

The Kerala government has granted KCA 75 per cent stamp duty exemption for registering the land. The BCCI had earlier inspected and approved a 22.5 ha site in Udayamperur village in Ernakulam. But KCA purchased the land at Edakochi at the rate of Rs 1.1 lakh for each cent measuring 133 sq metre.